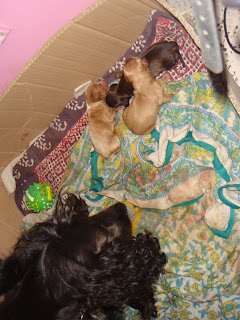 The mother with the newborns 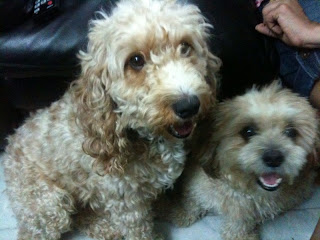 The proud father (on the left) and uncle.

Our family's youngest dog, the beautiful black cocker spaniel Mahi, delivered her first litter yesterday. The mother and babies are doing well, but since she is not letting anyone near them, we don't yet know the sex of the puppies. One of them didn't want to suckle, so has been fed by a dropper- yes, he's a boy, who has been named Piglet (for now, at least).
The vet had said that the pups were likely to be black, since it was likely to be the more dominant fur colour (the father is the pale gold American cocker spaniel, the bigger dog in the picture), so we are very pleased to see the little golden brown pups.

More puppy updates as and when I get them!
Posted by dipali at 9:04 AM

OMG! I want one! Spaniels are my favourite... I remember Mahi from her birthday party photo.

@Banno: Thank you!
@Aanchal: Awww it is:)
@The Bride: Young lady, methinks it is advisable for you to wait for a while before adding another cute and cuddly creature to your home!
@Aneela Z: Subhaanallah, annoying Aunt!!! Chocolate ke pasandeeda brand bhi bata dein.
@smartassbride: Truly:) I see them overrunning this blog!

@indianhomemaker: Thank you. And Aneela should get an award for posting the most entertaining comments!

i cant say "aww" enough number of times! too cute!