The Toddler is Confused

The toddler's vocabulary is expanding.
All animals used to be called "doggie."
On her recent trip to Goa, she encountered several crows, whose raucous cries of "Kao kao" became the onomatopoetic name for all birds, especially the numerous pigeons she can see from our balcony.
For reasons of her own, the little teddy bear that waits for her visits here is "Bebi." 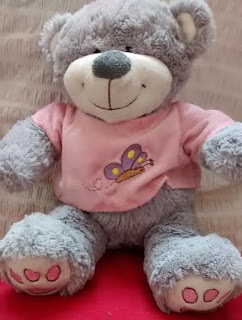 Before her first visit here last summer, the fond grandparents had had a laminated collage made of several of her photographs, all taken before she was three months old!!! Since there is no glass that can break or hurt her, she had access to this precious frame. She could recognise all the adults in the different pictures: Mamma, Baba, Dadu and Dadi. What puzzled her immensely was the baby. Who was this baby? All the adults were holding her so carefully, so lovingly. Where was she?
We tried telling her that it was Ms. Toddler herself as a small baby, but it was no easy task.
Her beloved parents and grandparents were holding some strange baby. Truly a mystery for her.

Ms. Toddler was most intrigued.

She now seems to recognise her reflection in the mirror, particularly if she has the reference point of an adult in the real world as well as in the mirror. It is wonderful to see her dealing with new concepts as she engages with the world. But the baby in the photographs remains a huge mystery to her!

Indeed such joy of a grandchild must be taken in full measure. Good you came nearer her, Dipali!