The Princesses have gone, the kingdom is desolate

The little princesses flew across the skies
nearly a year ago, to live in our city,
one tiny, just a few months old,
on her very first visit to our home.
The older princess, still little, not yet four,
with boundless energy, (our very own Tigger)
and a million questions about
Life, the Universe, and Everything,
reminiscent of her father at that age.

A magical year, watching them grow,
infant to toddler, little girl to bigger girl,
sisters learning to be with each other,
and, praise the Lord,
enjoy each other's company,
for a while, at least!

The princesses lived a few miles away from us,
but were quite accessible, especially the little one
who was our favourite reason for a pit stop
at their place, hoping that she wasn't napping!
The big one went to school, but on weekends
she was usually ours, to indulge and enjoy,
take out on expeditions, feed 'palatha', daal chawal,
and chicken momos at Mainland China.
We had our rituals, her endless baths in our tub,
favourite story books, and her grandfather being
the fairest of them all!
We were well educated by her about Peppa Pig,
and other characters we didn't know about.
We were good about rationing screen time,
and found her to be most creative with blocks.
Waking up to questions about how do fish sleep?
Google was my best friend for months!

The tiny one learned to sit, and crawl, creep, and stand
especially around their mirror top centre table.
Her reach extended inch by inch: every glass and cup
was endangered by her grabby little hands.
Whatever you happened to eat or drink was fair game
for our avid little puppy.
As were cell phones.
Big people seem to use them all the time:
so this little person had to grab them too, if she could.
Speech appeared, a few words, mostly proper nouns,
and lots of babbling, at full volume!
Inimitable and unforgettable.
And once she learned to walk,
she would be walking all day,
almost every waking moment.
Toddle toddle, waddle waddle,
as Big Sister would say.

I thought I'd take her for a walk,
when she came to stay just before they left,
but it seemed as though she was taking me,
trotting along at speed, deciding where to go,
as fast as those little legs could carry her.

There are bits and pieces all over the house
that belonged to the little princesses.
A book, a toy, a  globe on which much Geography
was discussed. The big one has been quite
a globe-trotter for her years, but if you mention a country
that you've visited and she hasn't, be prepared:
A mournful "I've never been to Australia/Sri Lanka/Africa"
will follow!

It's endless, the missing.
The baby/child-proofed house will eventually
get back to 'normal',
but missing feels like the new normal
in our desolate kingdom, missing and memories... 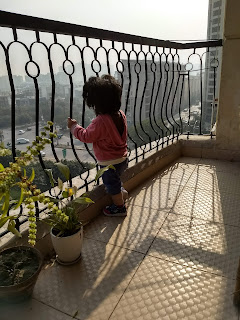 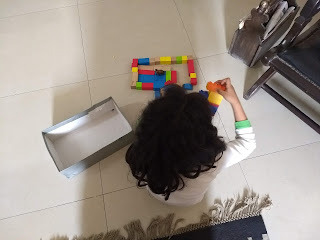 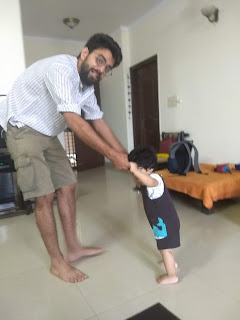 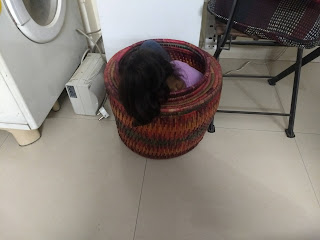 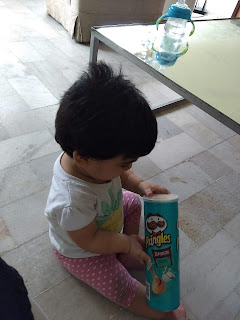 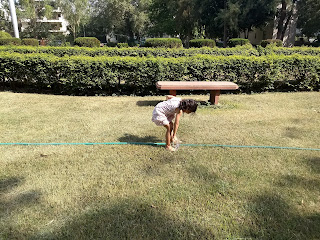 I love this! I see my folks and in laws interact with my child and I always wonder if he will subconsciously remember the feelings rather than deeds/ words/ actions. The love of a grandparent is so very special!

Loved this....print went all blurry as I read on with a lump in my throat. Your post is all the more eloquent and moving because it is understated and not melodramatic. Bloggy equivalent of Talat Mahmood. Your princesses will cherish this when they are old enough to read. ❤

@Saraswati: Thank you for your generous words!

I could picture my parents when I read your post, Dips. They always talk with a lump in their throat when I make the customary “ we have reached home” phone call after visiting them. Hugs.

@ Boo: Thank you! I guess all grandparents feel like this...