The Garden Of Heaven by Madhulika Liddle: my three reviews! 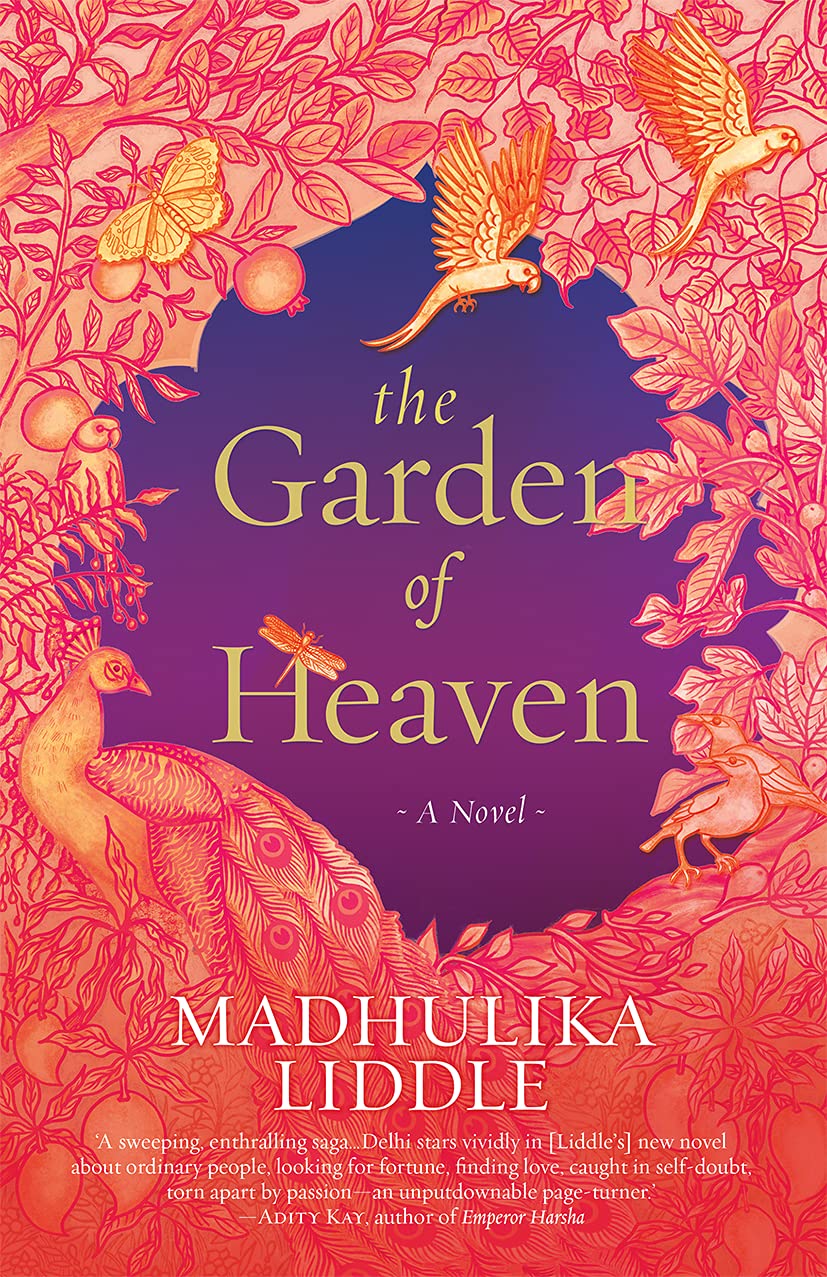 Madhulika Liddle has surpassed herself with this exquisitely crafted novel, set in the Delhi of the twelfth to the fourteenth centuries, the period between the conquests by Muhammed of Ghur, and Taimur. Epic in its sweep, peopled with beautifully etched characters, representatives of two families whose lives intertwine across the generations. Actual historical figures add to the authenticity of the stories. Many of our present day concerns are reflected in the narration. The interaction between members of different communities,i.e. the conquerors and the conquered, have interesting social ramifications. Razia Sultan, Yogi Maiyya, and Jayshree, among others, are strong women whose actions affect many others. The relationships between the sexes are sensitively depicted. The book is structured very cleverly, interweaving its several discrete threads into a beautiful whole. A book to be read and re-read several times. The city of Delhi is depicted in a fascinating manner, and is, indeed, a central character in the book!

The Garden of Heaven (The Delhi Quartet #1) : My Goodreads review

An exquisite look at a turbulent period of Delhi's history, through the eyes of members of two families. The family of Sridhar Sahu migrates to Delhi in peacetime, in order for Sahu to further his fortunes. Young Madhav loses his entire family and village as Muhammed of Ghur's marauding army, led by Qutbuddin Aibak, wreaks havoc upon the civilian population as well as upon the army of Prithviraj Chauhan. The old stone carver, Balram, takes the terrified child under his wing and they start a new life in Delhi, settling down in Yoginipur. Yogi Maiyya is a fascinating character, a strong, independent widow who fends for herself, and has a soft corner for the most vulnerable. Liddle's characters are beautifully etched, as are the scenes she depicts. The story continues across generations, introducing much social commentary as the local populace learns to co-exist with the invaders. This fear of the 'other' is beautifully depicted in Girdhar's story. Razia Sultan appears in an intimate, personalized, cameo. Her friendship with Jayshree, Sridhar's granddaughter, has ramifications for the subsequent generations. i was delighted to see two of my favourite Delhi personages, Hazrat Nizamuddin Auliya and his devoted follower, Amir Khusro, as part of the narrative. The book is exquisitely crafted, with each story a richly woven panel, which forms an integral part of a larger tapestry. A book to be read and savoured again and again.

My very personal, subjective and emotional response to this book, which I read and re-read several times, and will read yet again. I am trying to analyse why I like it so very much, and perhaps that is more to do with me than with the book, but here goes:

The stench of war and the destruction in its wake frames the book, in a fraught, moving narration. War becomes the leitmotif  of the book, the prime mover that changes lives in an instant, no less than a devastating natural calamity. Families are destroyed, children orphaned, settlements destroyed. A peacetime migration for ostensibly economic prowess precedes the warfare, and a family settles down in the outskirts of Delhi. The conquering army 'settles' into its new abode, feared as the other, and yet needed as the provider for the conquered. The tensions between the conquerors and the conquered are beautifully depicted, sadly reflected till the present day. Despite the horrors of war, and the eternal apprehension of the 'other',  there is also immense kindness between many of the characters. It is a book written with compassion, and despite the devastation it depicts, there is also much growth, of the city, of the characters, across the generations.

(Growing up in Delhi in  the sixties and early seventies, wars, both actual and potential, were a grim reality, leaving an entire generation with memories of blacked out windows and air raid sirens and safety trenches. Fortunately I was never directly affected by war, but the fear of it remains deep within me, along with my fear of natural calamities).

The book speaks to me of a familiar milieu, of the land of my ancestors, who were also, historically, long ago migrants. In reading this book, I recall the comfort offered by the first grown up story teller of my life, my beloved Phupha. (My first ever story teller was my sister.) On our return to Delhi after six years in England, I was all of eight, my sister ten. We could understand, and also speak Hindi, but most inhibitedly. English was our comfort language, in a place that was so utterly different from anything that we we were familiar with. Those few months at my aunt and uncle's home, until my father was allotted his own government accommodation, were a strange orientation to our new life, back in the early sixties. Phupha would, every single evening, tell us stories, from the Ramayan, the Mahabharat, and Russian folk tales, all in English. He would also, when able to, take us to the playground at Birla Mandir. He was the most grandfatherly member of my family, and I miss him still. Even when I was a grown up myself, (or appeared to be one), his wisdom and kindliness were always a source of great sustenance and comfort. I am dipping into The Garden of Heaven again and again, finding so much similar beauty and comfort in its pages.

When a book has the power to move you like this, and to give you more and more insights on each reading, it is very very special indeed. Your beautiful book, Madhulika, speaks to my soul.