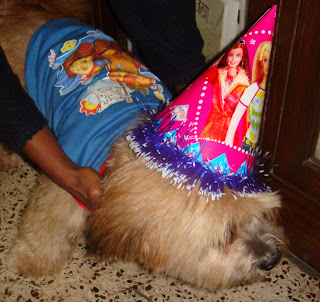 The little dog celebrated his first birthday today. The kids in the colony love him, and come over every afternoon to take him out to play with them.
Instead of the four who had declared that they would come for his birthday, a dozen landed up, bearing gifts of balls and toys suitable for a one year old dog! More party fare was promptly organised. 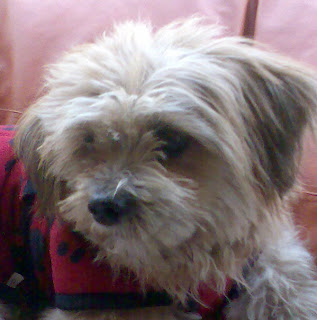 The birthday boy a couple of weeks ago. 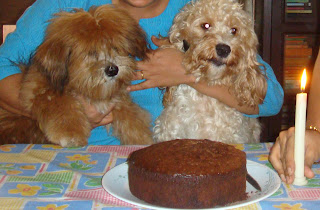 A cake had been made for Poco Loco as well, because sibling rivalry does exist. 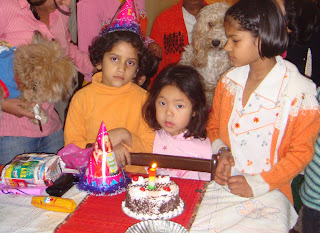 That furry bundle is about to 'cut' the cake.


There's been a dog in my daughter's home for at least six years now. The family does celebrate the dogs' birthdays, but very quietly. Such a party is unprecedented for the dogs, till now.
Our popular little Chotu really takes the (birthday) cake!
Posted by dipali at 8:03 PM

I have to send the link to Vicky to show The Bhablet!

I am so jealous and you have TWo of them? Life is unfair!
Happy birthday chotu and hugs Poco!

it is too early in the morning for such cuteness. i have od'd!

SHo shweet.
Wish a happy birthday to the cute little one.

I love this...we used to have bday parties for our dog when we were young. And now I'm craving a pet dog (but can't handle it with an infant and hubbie who doesn't like dogs).

how much cake did doggie get?1

Belated happy birthday to Poco..and to his sibling too (so he isn't left out)

i hope you don't mind me quoting u in slumdog millionaire review. :)

shoo shweet!!
and im not even a dog lover :S

Happy Birthday, Chotu! Here's to many more (that we're witness to)!

@everyone: Chotu sends woofy thanks to you all. And Poco woofs 'hello' too.

awwwwwwww.... that's so so so cute! May he have loads of fun livening up his home.