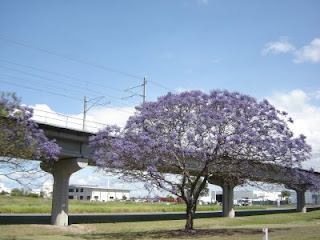 We planned to spend a day in Brisbane, after a few days spent at Gold Coast. Our itinerary included a sight seeing tour of the city. After our early morning hot air balloon ride, we were packed and ready for our ride into Brisbane. Our mini-bus came in on the dot, and we picked up assorted passengers on the way, some of whom needed to be dropped at the domestic air terminal, some at the international one. We picked up a young woman and her two children from what seemed to be her mother's home. The young woman was in tears, bravely trying to hide them behind her dark glasses, and from her side of the conversation on her cell phone, we deduced that her mother was seriously ill. Her little boy was skirmishing with his sister, who was prettily dressed in pink, with a matching hairband. As we approached the airport, we learned that owing to some passenger generated confusion, our driver would have to pick up someone from the international terminal and would not be able to drop us to our hotel and come back in time.
The SRE and I had been enjoying the scenery all this while. I'd noticed beautiful jacarandas along the way, and I tried taking a couple of pictures, but wasn't pleased with the result. I handed the camera to him, and he took the photograph I've posted here. In the meantime, our driver spoke to his supervisor, and arranged for us to board another bus to our hotel. So we unloaded and reloaded our bag and baggage, and were maybe a couple of kilometres away from the airport when the SRE realised that he'd left the camera in the first bus. Apart from whatever intrinsic value it had, the camera also had all our precious photographs of our vacation, so we definitely wanted to get it back. Many phone calls later it was decided that it would be delivered to us at the airport in the morning, as the driver had taken it back with him to Gold Coast, and the airport was midway between the two cities. We were not very pleased with life, though. With this delay we'd also missed our sight-seeing tour of Brisbane. The bus took a fairly circuitous route, leaving airport passengers at various hotels along the way. Brisbane was hilly, and absolutely full of jacaranda trees in full bloom. Glorious purple trees lined most of the roads, and Brisbane seemed far hillier than Melbourne.
We were booked into the Ibis, a hotel which actually had comfortable mattresses.
Two queen sized beds in one room- such a luxury! What I really loved in all the hotels in Oz were the one ounce containers of milk in the fridge- just right for a regular cup of tea.
We strolled down the road and discovered some amazing life size statues on the road. Across the road was the Old Queensland Museum, which used to be used as an exhibition hall, and is the proud possessor of a huge organ . We discovered that Brisbane and the Museum had had its share of floods. All kinds of beautiful handcrafted objects from exhibitions down the ages.
And a huge organ in a beautiful hall. A hall full of modern paintings, adjoined by a shop selling funky jewellery, scarves, toys, books, posters, all kinds of interesting memorabilia.
I really missed our camera there. We decided to cross the Brisbane River, over to the South Bank, which had the more modern museums and theatres, but it was much too late to see any of them. We did walk several kilometres, working up a good appetite for our dinner.
The river is wide and grey and lovely. We knew that we hadn't seen much of the city, but whenever I see a jacaranda tree, I do remember beautiful Brisbane.
We did get our camera back at the airport the next morning!
Edited to add: I was in Australia last October. Just trying to put the memories down, albeit rather late in the day.
Posted by dipali at 10:58 PM

You are in Australia, lucky you

@sandeepa- lucky me was in Australia last October- the posts are very slow! Sorry to mislead you.

i might be biased...but if you walked around the Southbank area you have seen most of what brissy has to offer, the city runs on its proximity to Gold Coast.

deriving vicarious pleasure from your trip!!

gorgeous, gorgeous blooms. I ahve never seen jacarandas in the US.. maybe on the sough they do have those trees. We had one in our home in India.