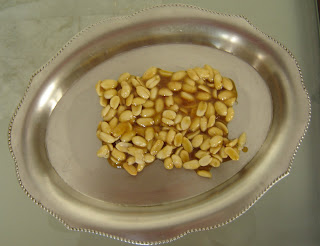 Mala Maasi knew how to keep her visiting nieces entertained! She had loads of natural authority, and was a person whose good opinion held great value. Neha and Diya, however indolent in their own home, would, at their maasi's home, remain on the qui-vive. She would get them to participate in whatever she was doing, and they would be delighted at a word of praise from their aunt. They loved her cooking, which seemed richer and more varied than their mother's repertoire. Their male cousins seemed to expect interesting food, and to Neha and Diya, everything tasted better at Maasi's. Mala Maasi's mother-in-law didn't live with her, she mostly stayed with her older son, but when she was due to visit, Maasi would hide all traces of the onions she normally cooked with, as her mother-in-law was old fashioned, and would not eat in her house if she knew that 'taamsik' food was being cooked there. Her grandsons would wait for the old lady to leave so that they could have raw onions in the salad and gravies redolent with onions and ginger. Although theirs was a vegetarian household, according to their grandmother such food would be completely intolerable.
Neha and Diya would always spend a week at Mala Maasi's house every summer vacation. They were always happy to see their favourite aunt, and were very eager to share whatever was new in their lives with her. Since she had two sons of her own, and no daughters, Mala enjoyed their company and their interests. One memorable year, Diya was terribly excited
as her class teacher had brought peanut brittle to the class picnic, and had also told them how to make it. Since they hadn't had time to make it at home, they decided that they would make it with their dear Maasi.
The peanut brittle became a family project. One cousin was asked to buy a kilo of roasted peanuts from the vendor near the bus stop. The four cousins sat and shelled the roasted nuts, taking care to remove the inner red skins. The younger cousin was eating more peanuts than he was shelling, which annoyed Diya terribly. "Bhaiya, if you eat all the peanuts, how can I make chikki?"
Somehow they managed to save two cups of shelled peanuts. As it was summertime, Mala Maasi didn't have any jaggery in the house, but decided to make the brittle with sugar instead. Mala Maasi took two tablespoonfuls of ghee in a large karhai and added one cup of sugar to this. The sugar melted, and then was caramelised over a low flame. Neha and Diya, in the meantime, greased a large thaali. Once the sugar was a rich brown, Maasi quickly stirred in the peanuts and poured the mixture onto the greased thaali, and set it to cool under the fan in the dining room. Once it cooled down, maasi tried to cut it into pieces with a sharp knife. The brittle was, however, so hard, that a sharp shard flew off and cut her thumb. Neha and Diya looked at the blood oozing from their maasi's thumb with horror. Mala Maasi laughed as she ran cold water over her thumb, "Girls, today we have truly created a 'meethi chhuri', literally a sweet knife!"
They decided that breaking off bits of chikki was better than trying to cut it. It was delicious. They also learned, the next time they made it, to score it with a knife while the mixture was still hot, so that the pieces broke into proper shapes.
Maala Maasi's thumb bore a small scar for the rest of her life, but it didn't diminish her affection for her 'meethi chhuri' nieces one whit.

Heat the ghee in a heavy karhai.
Melt the sugar into it over a low flame, till the sugar melts and turns brown.
Add the peanuts and mix well.
Pour into a greased plate and smoothen out the top with a spoon.
Allow to cool.
Break into small pieces and serve.

This post is my contribution to the Food Fiction event hosted by Aquadaze - Of Chalks and Chopsticks.
Posted by dipali at 9:10 AM

What a "Sweet" story! And I LOVE chikki.

ooh chikki - forbidden pleasures..sigh .And you too better remember that mam

a simple story and a (im assuming) simple recipe to go with it. are u sure making chikki is that easy?peanuts, sugar, ghee and that it? no super chef tips required? i always believe sugar cookery is for the experts..may be because that wat ppl say... i've ever tried any india sweet- no gond ke laddoo, no besan barfi... i tried rasgullas once and they were a total disaster!!

Thanks, everyone.
Yes, Mandira, it's that simple. Just let the sugar melt on a slow flame and caramelise. I made it after years just for the photograph!