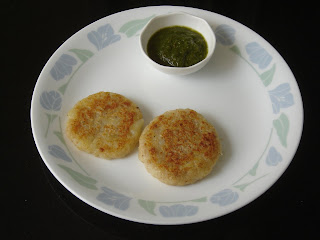 For several years past, my father has slowly stopped eating a 'normal' diet, owing to various real and perhaps imagined ailments. When he and my mother first came to stay with me in Gummidipoondi in early 2005, he was mostly partaking of a 'normal' North Indian diet, with chapatis and veggies and dals and salads. He and my mother would start the day with tea and toast, have hot milk with muesli for breakfast, some fruit for elevenses, and they would have lunch with the SRE, whose workplace was near enough for him to come home for lunch and a quick nap. Dinner was usually a vegetable with a light gravy and some curd.
After a while, Dad found that chapatis were difficult for him to chew, so we started soaking them in the dal or the vegetable gravy. His dentures were troublesome, but given his limited mobility and the distance to Chennai, he wasn't too enthusiastic about getting a new set. He also has one tooth of his own which complicates life a bit- he is uncomfortable if he removes the denture for any length of time.
We moved to Kolkata, the following summer, and my parents spent a few months in Delhi with my sister while I house-hunted (that's another story- I saw between 35-40 houses and apartments before finalising this one, which I didn't actually see before moving in, I saw its twin on the first floor) and then moved my worldly goods. Dad decided that even soaked chapatis were no fun, so he had toast dipped in his dal or sabzi or soup. The occasional home made dosas were relished, as were moong dal chillas with coriander chutney (especially made for him without chillies). Lauki (vegetable marrow) was his vegetable of choice, and that too had to have no seeds at all or very tender ones. My mother would enjoy all kinds of things, and Dad would occasionally try something a little spicy or rich, but it would usually not agree with him. The same Dad who would break off a piece of his sizzling hot green chilli for me to try, was now eating very bland and rather boring food. Dad had always been fond of good food, so it was rather painful seeing him struggle through what he thought agreed with him.
Life changed for us all with my mother's illness. Dad developed a serious lung infection, and by the time my mother had passed away, he had more or less given up on solid food. He spent weeks on liquids: fruit juice and buttermilk, the occasional cup of tea with a Marie biscuit. The doctor described him as terminally ill. Though he is immensely frail and not able to sit up without support, he's been quite lucid. I'd keep asking him what he'd like to eat, and he rarely evinced interest in anything. Years ago, when were living in Lucknow, my parents had visited us, and one of the things my father had really liked were potato cutlets with a cheese filling. So one fine day he agreed to have those. Cheese is of course not always easy to digest, but those cheese cutlets got him back on the eating track. Nowadays his diet still consists of a lot of liquids, but the staple solid foods are potato tikkis with coriander chutney, khichdi, paneer (chhena) mixed with powdered sugar, ice cream, and the occasional piece of chocolate!
The doctor is really surprised and pleased at his progress. I mix up and keep large batches of the tikki mixture and chutney, so that the day and night nurses can shallow fry them for him whenever he wants some. I often come back from my morning walk to a house redolent of fried tikkis. I have started curdling the milk for the chhena with curd- the resultant chhena is very soft, and is easier for Dad to swallow.

Peel and mash the potatoes. Crumb the bread in the mixie masala jar. Mix thoroughly with potatoes, salt and spices. Shape into flat tikkis. Shallow fry till brown and crisp.

Coriander chutney:
One cup thoroughly washed coriander leaves
Two-three small tomatoes or a raw mango in season
(Then you can skip the amchur and lemon juice)
Asafoetida powder- a good pinch
Garam masala- a large pinch
Salt and kala namak to taste
Amchur powder
Lemon juice
Blend all ingredients in the chutney jar of your blender. Check for seasonings. For regular chutney add a green chilli or two.

Yes, strange diet, but very delicious, you must be pleased that he's eating again.

U r such a concerned daughter!

Sometimes, the smaller things make the big difference. You are an awesome daughter!

Your post brought me a smile and a craving for tikkis. I recently wrote about how I missed having them on my recent trip to Delhi, because of food poisoning. Guess it's time to cook today :)

You realise on Sunday night he spoke more than I've heard him speak in months?

they look delicious - and with all your love going into it, I know why your dad craves them! warm, heart-melting post. hugs.

they look yummy... and here's a hug for nanaji.

this is very good news. (the cheese is high protein, which is probably doing him good. the doc used to tell my father to have it).

That's wonderful Dipali! It's really an encouraging sign. Hugs to you and best wishes to your dad. You're a fantastic caring daughter!

Your post is not showing up on my sidebar.Dyou know I thought of Uncle and the alu tikkas and thought you should make a post for the food fiction event , although in your case it is more fact than fiction .

Such a touching post!You are a wonderful daughter.

You're a wonderful daughter. Hugs!

And bon appetit to your dad.

It's great that you think of ways to bring him back to food. I imagine it requires love, patience and creativity.

That's so thougthful of you Dipali. Such a yummy thing to think of to bring his apetite back ! Hugs.

And..thanks for visiting my ( kind of ) new blog.

oh...and I am going to try this recipe soon...my cutlets never turn up so smooth - so I had given up on them !

Such a wonderful daughter. I guess the diet is not the ideal one, but considering his age and condition, you are wisely giving him what he would enjoy and atleast consume and beside providing him some energy. How thoughtful!

You are a great daughter! It must hurt to see him struggle to eat when you remember him relishing his food in the earlier days. Hugs.

Can you please share your recipe of cheese filled potato cutlets?