A Refreshing Change: The Reluctant Detective 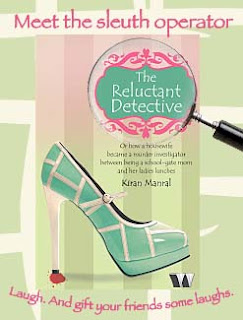 One doesn't think of murder as a laughing matter. More than one murder, even less so. But when two murders happen in close proximity, near the housing complex in which the protagonist Kay Mehra resides, they become the raison d'etre for what is often a hilarious book.
Anyone who is familiar with Kiran Manral's blogs will recognise her self-deprecating humour, her patent exaggerations, her child's (former) speech patterns. Many of her concerns as a parent come through in the book: Kay Mehra's dread of Parent Teacher meetings in the school, for one, the child's desire for junk food another!
Detaching from the blogspeak, so to say, the book still holds true. The chapter headings themselves make you smile: In Which There is Never Anything to Wear, Close Encounters With the Police Kind, In Which Much Gaping at a Superstar Happens, In Which There Is A Typical Suburban Weekend, and so on. What is interesting is the effortless ease with which suburban life is painted, with detailed sketches of minor and major characters. Kay's compassion, empathy and her apparent psychic sensitivity make it imperative for her to get to the bottom of the murder of her fellow morning jogger, Sheetal Jaiswal, with whom she has just a nodding acquaintance. So nodding, that even the regulation condolence visit is a complete farce!
At the decent hour of 11a.m.,around five of us put on our white condolence and flag-hoisting and political meet purpose regulation salwar kameezes and appropriately mournful exzpressions and landed up at the E wing lobby, congregating like a flock of chattering seagulls. We took the lift up together in hushed silence though. The bereaved husband, however, does not entertain the women or their condolences, and they leave his doorway feeling most unsatisfied.
Kay reminisces: In the two years Sheetal Jaiswal had passed each other in the mornings, all we had done was crack an occasional wary smile at each other, not a single word had been exchanged by us,.........yes, it was true. She hadn't had any friends. What a miserable life she must have led:no friends, an antisocial husband, and weight that refused to shift itself.

An encounter with the complex's resident TV star Meena has Kay in form: I was torn between wanting to shoot her in the head for being so unbelievably slim, and asking for her dietician's number.
A few paragraph's later, she says, of Meena: I had always envied her life, national fame, a career to die for, no one to answer to, and the freedom to call for takeaway every single day of her life. And I was sure Meena envied my life in a way I couldn't understand, and definitely didn't want to understand on days when the child had me tearing my hair out in bunches........
And after the Parent Teacher meeting, Kay says: I love my food, I love buffets. When the two come together, especially after times when I am emotionally drained and hurting, like this, when I have had to sit through half an hour of being told why the child is well on his way to delinquency.......... I need food that was deep fried, and desserts which are steeped in sugar.

Kay seeks the help of an old school friend of hers, Runa, who happens to be a private detective. Since no one is paying for the investigation, Runa insists that Kay does the legwork, which is something that our dainty, lady-like protagonist finds rather unsavoury: This was a completely new twist of events. I was not cut out for blood and gore; I was a delicate, mincing creature, who, had I been Victorian, would have to move around with smelling salts in my skirts.
Runa, however, insists: Ask around. Ask the neighbours about the lady who was killed. Ask the security guards of her building.Ask her maids. If you spot the cops who came to meet you, ask them about progress in the case Go to where she was found, look around, see if there is something you can find.
Kay reluctantly does follow Runa's advice, leading to the capture and arrest of Sheetal Jaiswal's murderer.

A brilliant first novel, light hearted, yet accurate and oh-so-honest in it's portrayal of modern-day urban life. The various characters are sketched in with deft strokes, and of course you have to love Kay, with her struggles with her weight, her clothes, her son, and at times, her strong, mostly silent spouse.
Looking forward to many more books from you, Ms.Manral!

Well written Dipali.... need to get some humour in my life, will definitely get a copy.

I am reading the same book right now and I too found the protagonist very endearing, the portrayal of typical life in a housing complex very honest.. still reading :)

Seems like a book worth reading. Could do with a few laughs.