My foot and I

My feet and I have not been the best of friends, especially in recent years.
As a young child I had to walk on tiptoe and on the sides of my feet to correct a tendency to flat feet.
As a teenager my vanity took a beating as my feet relentlessly took on the shape of my father's feet- broad and knobbly, not at all like my mother's slender ones. I would often express my frustration to my poor father, who listened to me with his characteristic good humour, and then comforted me with the fact that they were servicable feet that allowed me to walk and run, and were therefore a blessing to be counted!
It was cold comfort, though, when every shoe salesman in the world would tell me that I had broad feet. As if I didn't know that.....
Buying pretty footwear was Mission Almost Impossible.
All sneakers would soon develop a hole where the bone protruded, and would hence look shabby way before they should have.
I most certainly did not have Happy Feet. 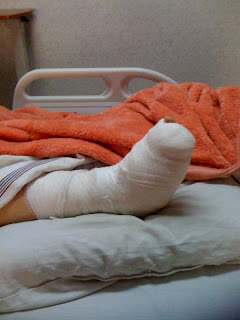 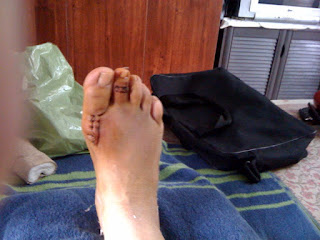 In October 2008, while visiting Australia, I realised that I could not wear the comfortable slippers I had recently bought from Bata (my all time favourite shoe shop- they always have something I can wear) - the toe-post caused excruciating pain between my right big toe and its neighbour. That's when the neighbour slowly started rising from its normal position, and over the next couple of years it had climbed onto the big toe, making most footwear uncomfortable. I still used to walk a lot, without discomfort, until late 2010. An hour long walk in Cairo (in comfortable Scholls) left my feet in agony My local orthopedic surgeon told me I had metatarsalgia, and advised shoes with metatarsal bar supports, which were fitted into my Scholls by an orthotics supplier. They were painful to wear,  and my feet hurt after walking for more than 30-40 minutes. And the toe was still rising. Finally, last August, my older daughter took me to her orthopedic surgeon, who has been a fixture in our family for 16-17 years, and he advised me to have surgery. The next visit was scheduled, arrangements made for the SRE, the part time help, who would prepare dinner for him, and run the household as best as she could, and, of course, the house key! My neighbour was recruited for this important task, of letting the maid into the house. Thanks to the ubiquity of cell phones, I could inform my help when the SRE was travelling, and when the son would be around. There was also an inter-state crisis, later, while I was post-operative, when the SRE called up from Mumbai Airport, telling me that he had had several loose motions that morning. I asked him to ask the air hostess for Imodium. The maid was phoned and asked to make thin khichdi for him, the driver was phoned and asked to buy bananas, and the younger son asked to stay home that night and look after his father. The SRE recovered soon enough, with all these remote-controlled ministrations, and next morning found him cooking breakfast for the visiting son and friends!)

Anyway, I had the surgery in early September, resting at the older daughter's home, and having the dressing changed every second day.You can see the tip of the inserted pin at the top of the second toe in the second photo. The pin was removed shortly before I left for home. I was allowed to walk, and felt very proud of myself for every round of the colony compound!

Although the stitches had healed well, and I was continuing to foment the foot in hot saline solution and having hot wax treatments, the toe remained elevated. On the next visit to Delhi, two months after the operation, the doctor gave me heavy sedation and did something drastic to the toe, externally, to free the joint. That was really painful, as was my left arm, which was all swollen after the intravenous injection. (Strange, because I was also given an IV shot in my right hand, which remained normal)! 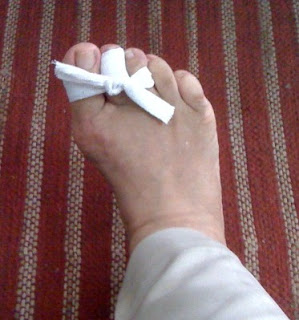 After all this, though, the toe still tends to float. My right footprint shows four toes instead of five- I wonder if I'm a four-toed sloth bear or some such creature.  And so it is now being tied into position, with a dinky little knot pressing down on it. (See above)
As Footji is still a little swollen, I live in floaters- which I even wear with (gasps of horror)  sarees.
I hope that I am able to wear all my sandals and shoes eventually, even though my girls call most of them 'dhup-dhups', since they weren't particularly elegant or pretty to start with.

Godji and Footji, I have got the message. I am grateful for the feet I have, promise.
My dear feet, please, please behave and remain serviceable and walkable. 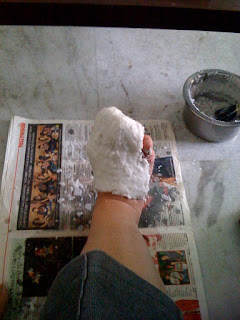 Edited to add: Since I'm posting such intimate details about Footji, here's another pic., of Footji having hot wax therapy!
Posted by dipali at 7:31 PM

Ouch! That sounds painful to a high degree... Your sense of humour though is not a floating being but very solid! Take care Dipali... Hope 2013 will be awesome, foot-wise...

The bow looks adorable though :-)

aiyo thats scary na...Hope you are feeling better and it isnt too much painful now :(

@Preeti: Thanks, Preeti:) My sense of humour is mighty pleased!
@Rohini: Thanks- people are talking of multi-coloured, polka dotted ribbons and stuff for Footji:)
@R's Mum: Only occasionally painful now. Thank you for your footful wishes:) May you have a great year too!

Gosh! That sounds too painful. Take care and feel better. Love your spirit taking this in stride (no pun intended :) )!

Sounds really awful...glad you are on the road to recovery!

I have to say this, DipaliJi, you are very brave. I hope that you will be able to wear all those pretty sandals and shoes. Your post teaches us to thank the Almighty one for the blessings and the little sufferings we are blessed with in our life. I too pray that my dear feet will also 'please, please behave' and wish you the very best after the feet rest. Take care. Keep writing.

@Dipti: Thank you!
@Sands: Thank you, and all puns, intentional or not, are welcome!
@Sukanya: My daughter pampered me through the worst of it!
@Yasmeen: Thank you:)
@Sanand: Thank you so much!I hope to write much more this year.