No, nothing to do with bananas! This is a Hindi / English khichdi phrase used by my younger son to great comic effect.
The first time I heard this was some years ago when I'd gone to a wholesale store and bought a 1 litre bottle of my favourite green apple shampoo. Since the bottle proved to be too unwieldy to use conveniently, I poured some into an empty shampoo bottle in my bathroom, and forgot all about it.
A few days later, on a visit home from the college hostel, the son deigns to bathe in our bathroom. He emerges a while later, not too pleased with life. He accosts me, saying Aapney mujhe owl banaaya.
I ask him how, and he brings out the bottle of Head and Shoulders Shampoo, which now contains Biotique Green Apple!!!!!

There's an interesting cultural divide here- in the West the owl is meant to be wise, but in India, although it is venerated as the Goddess Lakshmi's mount, in colloquial Hindi at least, it is considered to be a foolish creature.

Somehow, the son's phrase became part of the family's idiom, as in Aap mujhe owl toh nahin banana chaah rahey hain? ('You are not wanting/trying to make an owl out of me'? it certainly sounds better in Hindi)!

We were returning to Kolkata from Raipur last month, from the brand new airport terminal there. (When we had visited my Chacha in Bhilai last October, the terminal had not yet been inaugurated). We were taking the Indigo flight back to Kolkata on Christmas evening. While booking the tickets, our seats had also been reserved, two adjacent seats (13 B & C) in the emergency exit row, which we prefer for the added leg space. These are seats we often have pre-booked. In many years of flying, we have never yet had to face an emergency in the air, thank God. The girl at the counter, however, was definitely trying to make owls out of us, because as she checked us in, she told us that it would be better if we changed our seats, as the emergency exit door weighed about thirty kilograms, and apparently both of us looked too old/frail to be able to handle that kind of weight. This ridiculous statement was supported a young male Indigo employee, who suggested that the aeroplane crew was likely to change our seats in any case. At which point the SRE lost his temper. One growl from him and the two employees quaked in their shoes, put priority tags on our luggage, and handed us our boarding passes. After we stopped fuming, we were most amused, because in any case it is only the persons in seats A & F who actually access the emergency exit doors. When we finally boarded the plane, our co-passenger in Seat 13 A was a small built Chinese gentleman.  (The SRE asked him where he was from). And the weight of the door, in clear red letters said, 33lbs!!!!
Someone had certainly tried making owls out of us! 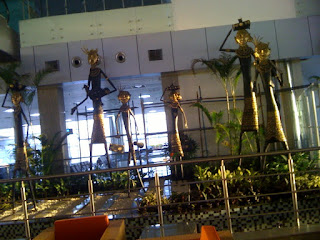 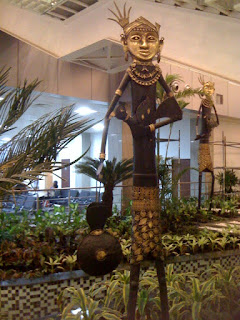 The beautiful tribal figures at Raipur Airport.
Posted by dipali at 6:13 PM

Please do:)
All of my family's resident and non-resident owls will be delighted!

Good read maasi. Although sad to hear that it was IndiGo staff that prompted it :(
I suppose it is high time that I get rid of the misplaced sense of loyalty :)

@Ipshita: Thanks! It seemed very very uncharacteristic of Indigo, which is generally very good in all respects - if they had persisted with their nonsense we would have complained to someone senior there!

Yo - what a funny thing . Aman's funny bone is as long as Vinod's ! Like Ro I plan to steal the term !

Owl banana - I love the language mix and it really sent my imagination into overdrive in the few seconds I took to click here from FB!