Why I Love New York-Part II 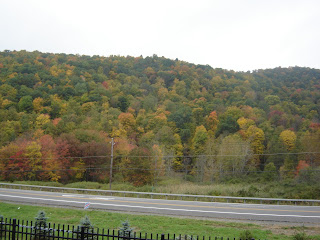 The grandeur of early fall as seen from Wassaic station

As I'd mentioned in my earlier posts, I wasn't a very enthusiastic traveller on our trip to the US last year, basically because I was totally exhausted even before I'd left home, and couldn't sleep at all on the first leg of the journey (till Stupid Frankfurt! Thanks, Parul). Since we never spent more than a couple of days in any one place, the entire three week journey was lived out of suitcases, which of course I had to pack and unpack and repack, endlessly. The Sometimes Resident Engineer is very good at thinking, planning, brain work in general, but all too often, he is the Management, and I am Labour. Bah. (On our last one-and-a half day trip to Delhi, for my nephew's wedding, his electric toothbrush and razor got left behind at my daughter's place. The poor chap didn't utter a word, trotted down to the local shop and bought replacements, but of course I stupidly did feel guilty. I guess I've psyched myself into being Labour for this janam). I am a champion digressor, as you can see.
It is only now, with the fatigue way behind me, that I'm able to think of all the wonderful things I experienced, and can relive them and share them with you. (My apologies to those whom I've confused into thinking that these are recent pictures. I'm very much in Kolkata).

We flew from Washington DC to JFK, and did not go into New York city from there. That would have been much too tame for us high-flying types! We flew to Albany, were received by an old friend of my husband, and drove down to his country house! Whew! It was beautiful, a lovely old house in acres and acres of land, with beautiful oak and maple and lots of unknown trees which were all changing hue, giving us a beautiful view of fall colours. The kind friend and his wife drove us around the region, which is dotted with small towns, some of which specialise in New England antiques, and are amazingly picturesque. We could have picked apples off the trees- it was the picking season. We saw some amazing studio pottery, among other interesting things.We also briefly visited Tanglewood, the summer home of the Boston Symphony Orchestra. There was so much to see, and not enough time, as early the next morning we were to catch a train from Wassaic to Grand Central station, where we would meet our older son.

Much as I love nature, I am a city person at heart. Nature is beautiful, soothing, and peaceful, but cities have a rush and a buzz of their own. The New York subway is old and the tunnels seem rather scary. Reaching Grand Central after the teeny station at Wassaic was like being back in an Indian metropolis-lots of people, all rushing around, apparently all knowing where they want to go. The two of us and our suitcases waited in the designated meeting place until our son appeared. After days of glorious sunshine and balmy weather, New York welcomed us in true desi style- gentle rain while we waited for a taxi. The names of the streets seemed familiar. Madison Avenue with its swish store fronts. We checked into our hotel, and had warm and nourishing Greek food at a nearby restaurant. A taxi ride later, we realised that surface transport in NY is as slow and jam-ridden as Delhi or Kolkata.And then we were in a long, snaky but disciplined line outside the MoMa (the Museum of Modern Art). It is one of my major reasons for loving New York. We had seen some amazing paintings at the Smithsonian in Washington DC. But MoMa touched my ignorant soul with a whiff of magic. We started with an amazing exhibition of photographs, some practically as old as photography itself. There was an amazing bamboo structure being installed in a huge atrium. There were strange installations playing with light. And then there were the modern artists that I had a nodding acquaintance with.......
Most of the little knowledge of art I have is from the good old Reader's Digest and assorted newspaper articles.Some of which have taken up residence within me. Not only did the MoMA have huge canvases of Monet's waterlilies, several works by Picasso, Dali, Van Gogh's Starry Night and so many other treasures, they also had a sculpture that I had read about as a child, and had never imagined that I'd actually ever get to see - Brancusi's Bird in Space.
Pure joy, magic, and aching feet!

Down the subway till Washington Square. Because of the persistent drizzle it was rather dull and gloomy, but after a while a couple of musicians appeared on the scene. And then a long walk to Greenwich Village and Soho, names read countless times. Oh, another long digression here: I have to share with you my shopping mission statement. Before we left Kolkata, my maid said that I must get her something from Amreeka. I agreed, of course, but for the longest time couldn't think of what to get for her. Between Houston and Austin inspiration struck- Kolkata had been really cold the previous winter- a nice warm cardigan seemed to be the perfect gift. (She had spoken most disparagingly of the three soaps and small towel that an earlier employer had given her after a trip abroad). In Austin I did some pretty futile searching in a couple of malls and a Walmart. There were all kinds of synthetic, not very warm looking cardigans, but nothing seemed suitable. We even looked in the small town we visited in upstate New York, where anything that was even remotely suitable would have bought at least ten decent pure wool sweaters in India. Bah. Digression almost over- as we stepped out of the subway near our hotel on 77th Street, I spot 'Filene's Basement'. Filene's was a familiar name: camel hair coats bought from Filene's figured in the writings of JD Salinger. I find a blue-on-blue cardigan which feels warm and cosy, and doesn't cost an arm and a leg! Mission accomplished!
We stroll into a very dhaba like pizza joint where I have an amazing, loaded with veggies, huge slice of pizza. The guys have some non-veg versions. Then it's off to our hotel room for the night. Our son will return in the morning.

Dottie, now I know why I took so long over this- there is just so much to say that I keep putting it off! I think at least another instalment is required. More later, folks.
Posted by dipali at 6:20 AM

OMG I'm like that too....throughout the trip, I'm focused more on disaster control and the specifics and logistics. While the husband bonds with and spoils the kids rotten, I worry about how to make them forget and unlearn the hedonistic lifestyle they're being indulged with. Not to mention pushing me to the sidelines for the 'labour' like u say. And then later I sit back and go over the holiday enjoying it in polaroid moments in my head.
Waiting for more. Keep 'em coming!

@nat: nice to know I'm not alone. My family thinks me most ungrateful and nakhrebaaz! What to do, we are like this only!

see, see I am glad I hounded you! I remember the first time I saw Brancusi's birds. It was at the philly museum of art - they have a nice brancusi collection there and I thought.. this is it.. I never thought I would actually get to see brancusi's birds or rodin's thinker. I am so glad you enjoyed moma. A lot of the people go to NYC and look at the empire state and the liberty lady, but very few go inside the musems. I am not a big fan of the new fangled installations but I like my Miros thank you very much! Even Chip loves Miro. Did you see Miro in Moma? I loved the photographs too.. you see at all this art (real geniune art, not some cra**y modern stuff that is passed for art - you can see lots of that in SOHO) and you feel so small..

Did you get a chance to see Hirshorn in DC?