The redoubtable Maid in Malaysia tagged me to do this one, based on the wedding limericks tag that has been going around.
One awful limerick coming up!

It's been ages now since we first met
On a day I can never forget
The SRE and I
He's a strange yet wonderful guy
I think he is truly a pet.
Posted by dipali at 8:02 AM 11 comments:

is tough! Even for something as prosaic as sorting out old clothes to give to charity, there are always things that you think you might still want to use, even if you haven't used them in the past few years.
I do know that these last three years in Kolkata have seen several additions to my linen cupboard. After living miles away from the city in our previous location, sheer accessibility has made me more indulgent than I was previously. I also do give stuff to my maid when her house inevitably floods each year. Somehow, I find it easier to give things to a person whom I do know than to a cause that is somewhat removed. Some unknown person will wear that saree or that kurta, or will tear it up to make swaddling clothes- it often seems abstract, apart from my reality. But as long as the things are used, it shouldn't matter at all to me who uses them. Before I finally do give things away, I do make sure that I'm not being impulsive in my selection. What annoys me about myself is my lingering over sheets that I'd only use to prove a point, not that they are needed in my house at all. And surely charity means giving things away that are usable, in good condition, but which are no longer so new that giving them away would seem foolish rather than generous.
If I were to die tomorrow, none of these things would matter to me at all. This house full of clothes, books, music, glassware and crockery, all my colour coordinated cushion covers, bed covers and dhurries, none of them would matter to me. I was the person who would count the good spoons after each dinner party, and be most distressed if a single one went missing. I think I've come a long way from there, but there's still a long road ahead. How does one live in this material world carefully and yet with detachment?

These lines resonate with me when I get stuck between wanting to give things away and wanting to hang onto them:

No one knows when he will die,
He accumulates the stuff of a century,
not knowing of the next moment.
Posted by dipali at 8:36 AM 20 comments:

Diwali greetings to you all. Neera called up to wish me, and we realised that this was her family's first Diwali since their return to India last December. While talking of Diwali's past, both here and abroad, and the dishes we used to make, I remembered my first Diwali as a bride, and the amazing sweet I created! Thanks, Neera!

I come from a family with a long tradition of making various festive sweets and savouries at home, so I was quite confident of my culinary abilities. Our first Diwali seemed like a good time to impress the spouse, who was definitely more Resident then, than he is now!
(He used to work shifts, but that's another matter. He didn't travel. Did I tell you that he's away this Diwali? I may have to call him the Very Occasionally Resident Engineer.)
We were living in a small township near a small town in Thailand. In those days even potatoes were mostly ordered in from Bangkok, a good 125 km away. We were a young team- some couples with young children, some newly weds, all determined to create a home away from home.
We consulted each other, exchanged recipes, learned what was locally available. That first year, I decided to make gulab jamuns, among other goodies. I asked my neighbour for the proportions, bought a packet of Molly Milk Powder, and made a large bowlful of delicious looking gulab jamuns. We were sharing a flat at the time, (the other wife was still in India), and my spouse and our flatmate came home for lunch.
I served them a gulab jamun each. (No, I hadn't tasted them till then). I watched them anxiously. Both of them said, oh very nice, delicious, but something was definitely amiss. Their spoons were going through the GJs much too slowly. I took one myself, and learned, to my great chagrin, that my precious GJs were very very hard. So hard as to be inedible. A light bulb moment happened- I had completely forgotten to put in any ghee, which would have ensured a soft, delectable GJ. (That's when I decided to always write down recipes!)
But how could I throw away such a large quantity of a dish made with fairly expensive ingredients? Wasting food is just not on.

The men went back to the factory. I proceeded to puree the gulab jamuns in the blender. Even the blender moaned and groaned, they were that hard. I roasted some atta. I did some magical things, which I can no longer recall. When the guys came home that evening, for dessert there was this rather delicious and absolutely unique sweet- Gulab Jamun Barfi.
Posted by dipali at 2:24 PM 27 comments: 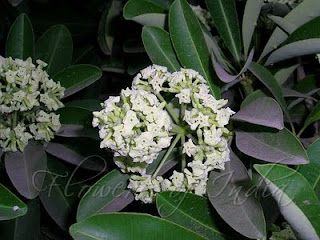 At present I have neither garden nor potted plants- leaving plants at different locations when transferred has been most heartbreaking, so I now only enjoy the greenery that exists outside my home. I have lived in homes with gardens at various times, and even though I lack a green thumb, I have loved my plants. Not the various malis we've employed, though- they have been expensive, erratic, and often quite ruthless: a moment's inattention had our beautiful croton bush decapitated. They've also amused us with their names for the plants- candytuft was called 'chandi-top', which sounds rather apt, actually!
For a long time I wasn't sure of the name of the tree pictured above. We had one in our back yard, and the younger son had managed to fix a seat for himself with a cushion, and made himself a tree house of sorts. I think some of his soft toys also climbed up with him sometimes! One fine day the younger son came home from school and informed me that the tree's correct name was Alistonia, the school mali being his infallible source. The tree was promptly named Alice, as in "Can you call A in to do his homework now?"
"Where is he?"
"Must be sitting in Alice"
We had a problem, though, when Alice grew too big for our little backyard, and blocked the little winter sunshine we received there. Alice had to be trimmed, but whichever mali we've ever employed has not been able to understand the concept of trimming. Imagine going to the hairdresser to get your hair trimmed neatly, and emerging totally bald. That's what happened to poor Alice. The poor son was devastated. The winter sunshine no longer felt warm on our skins. Shortly afterwards we were transferred yet again, so I have no idea if our Alice is still there or not.

Later on, we learned that the Latin name for Alice is Alstonia scholaris. In Hindi it is also known as Saptaparni, among other terms.
Common name: Dita bark, Devil tree • Hindi: शैतान का झाड Shaitan ka jhar , Chitvan चितवन (• Marathi: Satvin • Malayalam: Daivappala • Tamil: ஏழிலை பிள்ளை Ezilai piLLai முகும்பலை mukumpalai • Bengali: Chattim • Sanskrit: सप्तपर्ण Saptaparna
Botanical name: Alstonia scholaris Family: Apocynaceae (oleander family)
This elegant evergreen tree is found in most parts of India. The generic name commemorates the distinguished botanist, Prof. C. Alston of Edinburgh, 1685-1760. The species name scholaris refers to the fact that the timber of this tree has traditionally been used to make wooden slates for school children. Its is commonly known as the Devil Tree, as it is considered to be the abode of the devil, in popular imagination. In October small, green yet fragrant flowers appear. All parts of the tree can be considered poisonous. It is a tall elegant tree with greyish rough bark. Branches are whorled, and so are the leaves, that is, several of them coming out of the same point. The tree is really elegant whether it is flowering or not. The slightly rounded, leathery, dark green leaves form whorls of 4-7. And a very regular branching gives the tree a beautiful shape. The wood is too soft for making anything - so it is usually used in making packing boxes, blackboards etc. Its bark, known as Dita Bark, is used in traditional medicine to treat dysentry and fever. On the Western Ghats, tribal people are reluctant to sit or pass under this tree, for the fear of the devil. ( http://www.flowersofindia.net/catalog/slides/Devil%20Tree.html)

The Alstonia is in bloom now- a piquant, sweet and spicy perfume fills the air around it, especially in the evening. It is a smell that I love, but have come to dread, as my older daughter is severely allergic to it. And she happens to live in an area that is full of Alstonia. So I feel sorry for her whenever I smell poor Alice! Such is life.

Edited to add: By a strange coincidence, Anil P also blogged about this same tree recently, here.
His post has some awesome pictures of Alice!
Posted by dipali at 11:00 AM 15 comments:

On day 4 of physiotherapy

Since this Monday I've been spending part of each day in the hospital physiotherapy department . The first procedure I have is ultrasound therapy, which reduces the pain- an ultrasound probe is coated with gel, and my wrist is gently massaged with it. After that my wrist and hand are encased in molten wax and wrapped in a sheet of plastic and a towel. Once the wax cools down it is removed. This is followed by various painful exercises to help my hand regain its strength and full range of movement.

I also have to work on it at home: I have to soak it alternately in hot and cold water (as hot as I can bear, and as cold as tolerable), and then exercise it. I actually sit in the bathroom and read, with my left arm in a bucket up to my elbow!
I have bought a soft ball which I can squash thoroughly with my right hand, hardly at all with the left. I'm supposed to squeeze the ball as often as I can, throughout the day.

Today, for the first time since the fracture, I rolled out a few chapatis for the SRE's breakfast and packed lunch. It was painful, but it felt like a major triumph. Normalcy seems possible now.
Posted by dipali at 6:54 PM 19 comments: