Of children, Gibran, and a long forgotten quote

I discovered JD Salinger when I was in college. The Catcher in the Rye, although his best known work, a beautifully written novel of adolescent angst, and the first of his books that I read, is not my favourite Salinger. I fell in love with the Glass family, who inhabit Franny and Zooey, Raise High the Roofbeam, Carpenters and Seymour:An Introduction, and some of the stories in Nine Stories.
Salinger painlessly introduces concepts from Zen Buddhism and Japanese poetry, the Vedas and more. To a self-absorbed Delhi teenager, these were absolutely eye-opening ideas.
He opened up entire new worlds of Oriental thought, as well as my favourite quotation on child-rearing.
My friend Kiran has quoted here Kahlil Gibran's famous lines from The Prophet, which resonate with most of us for their absolute truth.

Your children are not your children.
They are the sons and daughters of Life's longing for itself.
They come through you but not from you,
And though they are with you yet they belong not to you.
You may give them your love but not your thoughts,
For they have their own thoughts.
You may house their bodies but not their souls,
For their souls dwell in the house of tomorrow,
which you cannot visit, not even in your dreams.
You may strive to be like them, but seek not to make them like you.
For life goes not backward not tarries with yesterday.

Salinger has a similar quotation from one of the Upanishads, I think, which has stayed with me over the decades:

A child is a guest in the house, to be cherished and loved, but never possessed, because he belongs to God.

Being my irreverent self, I have added a proviso:

'Of this and that' is now two years old.
My life has been enriched by many wonderful people, both in the real world as well as on the blogosphere, many of whom I read long before I started blogging. They also encouraged me to start my own blog, which is now such an integral part of my life. Thanks for all the support, folks.
The technology that has made this possible never ceases to amaze me, especially as I belong to a generation in whose lives even telephones were not very commonly owned, and peripatetic people like me would lose touch with friends as the initial enthusiasm for letter writing inevitably diminished. It is tremendously satisfying to know that with a working internet connection, I can be in touch with my friends anywhere in the world. Many of the bloggers I read or interact with over the internet or in the real world are much younger than I am, and it's good to know their opinions on the things that matter to them. I think they keep me far more attuned to my own kids than I might have been otherwise.

A friend sent me this delightful prayer, which I dedicate to all of you, my dear readers.

It's been a year since Lalita left us bereft.
Luckily, we can still find her magic, her brilliance, her whimsy, and her totally unassuming erudition on her blog.

I was fortunate enough to have actually met her a few times.
Too few, yet enough to leave an indelible imprint of her physical presence and her voice and her laugh.
I often see you still, Lali, in the shape of a head, a close cropped haircut, a tone of voice, in a Rafi rendition.
You remain in my world, unforgettable.
Posted by dipali at 9:31 AM 11 comments:

Give me a break!

I've had the kind of break I never did plan to have: a fractured wrist bone, setting which involved a short stay in the hospital. I was smart enough to fall down in my own bedroom.
My poor arm was actually hanging from a stand for a couple of days. Yes, I did manage to sleep like that, with the help of injected pain-killers.
I'm better now, and getting used to living with the weight of the cast.

Of course the SRE was non-resident when it happened, and reached the hospital the next morning, just when I was emerging from the operation theatre. He did, however, with a couple of phone calls, ensure that I was in good hands and that all the necessary procedures were hassle-free. His colleagues were also most cooperative.
I am really thankful to the wonderful friends and family members who were with me during this difficult time. You know who you are! Thank you and God bless you. The curly haired son was, besides being there when needed, also most entertaining. There are now words and phrases I'll never be able to hear without bursting into peals of laughter.

It's not easy reading books, magazines and newspapers with only one good hand.
Single-handed blogging isn't too bad, though!
Posted by dipali at 10:34 PM 48 comments:

It was my mother's eighty-first birthday yesterday. I'd got her new housecoats from the tailor just a couple of days ago, so she wore the prettiest one for her birthday. My youngest son, the still-teenager-with-awesomely-tempting-to-muss-up curly hair, was around for the long weekend.
It was a lovely hug he gave his Nani, she tiny and looking even more petite next to the skinny beanpole, who often times resembles an upside down mop.
Her surprise present was a CD player, which both she and my father liked. She has her own phone this year, bought just before I'd gone to Chennai last month, so she had the pleasure of receiving birthday calls on her own, personal phone. (One of those Walky things. Mobile phones are far too small for her to handle with ease).
My father seems more frail than ever before. He's decided that he is sick of all the incredibly boring food he's been having over the past several months, so now I ask him what he'd like to eat for each meal, and he's being a bit adventurous. As long as he is able to digest what he eats, it is fine! Anyway, he enjoyed the kheer I'd made for Janamashtmi, and the kaju katli I made to celebrate my mother's birthday. I'd made it after years, and had a misadventure or two with it before getting it right, and it was appreciated by the family, and the friends who visited us in the afternoon.

We (the SRE, the son, and I) went out for dinner and a movie. On the way, heard this incredibly moving patriotic song playing on the radio,
'Hum laaye hain toofan se kishti nikaal ke,
Is desh ko rakhna merey bacchon sambhaal key".

My Independence Day image for the year is of a little boy, perhaps four years old, playing with a bunch of three balloons, saffron , white and green, tossing them around happily near the buffet, not bothered about the risk of them floating near the hot dishes, simply enjoying himself with the sheer exuberance and joy of childhood.

Our sixty two year old nation still needs that exuberance and joy, and we need to take a lot of care that the balloons of our hard won freedom remain afloat, not destroyed by the myriad elements out to destroy it. 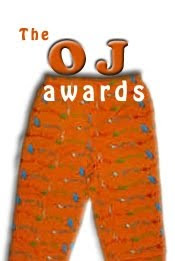 I'm definitely honoured to get this award, but a bit puzzled too, since I really do wonder which traffic I drove where, and when!
Sorry for being a slowcoach, OJ. (This was given to me on the 1st of July, OJ's blog's birthday.)

I do remember mailing some friends about Banno's brilliant reviews of Ghajini and Love 2050.

I wonder what other traffic I drove where, but I suppose I must have, if OJ thinks I have!
It is definitely wonderful coming across some new blogs which make you say, "Oh wow! This I like."

In the spirit of this award, I hereby direct you to some blogs I discovered recently.
(They may have been around forever, but since I just found them, they are new!)

Carnimire's Coffee Rings Everywhere
Ronita's Life's Like That
Starry eyed's Things do not change...we change
Wordjunkie who has emerged as a fine cartoonist as well as a brilliant writer. I've been reading her for a while, but this new avatar deserves a special mention, methinks.
Our old friend Mummyjaan is back, after a long hiatus. It's great reading her again.
Posted by dipali at 8:39 AM 15 comments:

No, I'm not talking about the film at all. I was just reading Terri's latest tail, and it triggered off memories from long ago. My older son must have been around nine or ten. He came home in tears after playing one evening, because one of the stray dogs in the neighbourhood had been in an accident, and seemed to be half paralysed. She had probably been struck by a scooter, and seemed to have a spinal injury, as she was only able to drag her hind legs along. He wished that we had a gun and could put her out of her misery. He wanted to call the SPCA, but I don't think there was a satisfactory response. We were feeling as helpless and miserable as the poor dog was, but our son was not one to give up.
He didn't want the poor animal to starve, so for weeks on end he would give her bread and milk both in the morning before going to school, and in the evening as well. Since she seemed so broken, so " tooti-phooti" in Hindi, she was named Tootsie. At times we wondered if the boy was prolonging her agony by keeping her alive. Tootsie lived in the park next to ours, a few hundred yards away from our house. Not only did she stay alive, she slowly and steadily recovered. I remember my son coming home completely and utterly overjoyed when he found that Tootsie was able to use her hind legs a bit. Slowly and steadily she did recover fully, and the next spring she had delivered a litter of healthy puppies.
One little boy with a compassionate heart, one stray brown dog with a fighting spirit.
It feels good to remember them both!
Posted by dipali at 10:55 PM 16 comments: