My day was made

While waiting for my friend in the mall, I heard faint, tuneful whistling.
When I turned to look at the whistler, I was delighted to see a spry, white haired lady, perhaps in her early sixties, whistling merrily as she made her way.

Gladdened my heart, her whistling!
Posted by dipali at 7:13 PM 9 comments:

When the SRE came home from office on Saturday evening (yes, he works most Saturdays), he was distraught. His cellphone was completely and utterly dead- not a glimmer, not a twinkle, not a beep out of it. We put in to charge, hoping that it would revive once it had some power in it. But it remained completely and utterly dead. Not only was he phoneless, he has huge amounts of important data on that phone, so he was understandably upset. On Sunday morning I called his secretary to get the number of the person who supplies phones to the office. The gentleman was told all the gory details, and said he would send someone to the office first thing on Monday morning to collect the phone, and try and retrieve all possible data. As instructed, I put the phone in the SRE's laptop bag, so that it would get to the office.

We had a nice and peaceful weekend, without the phone making its presence felt every few minutes.

I needed to speak to the SRE a few minutes ago, so I called him on his direct landline number. After telling him what I had to, I asked him if the phone chappie had collected the phone. He had come to collect it, but it turned out that after being comatose for over thirty six hours, the phone was alive and well again, and was apparently showing that it was 80% charged! 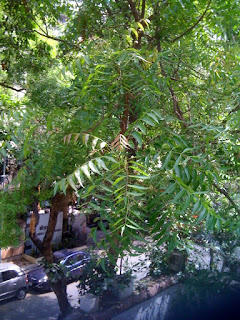 This neem tree grows outside our compound wall, and its beautiful foliage spreads almost to the balcony of what we still call my parents' room. (It also spreads generously outside that bedroom window, a pretty sight indeed). It is a tree I love, and have longed to caress for such a long time.     I'm also quite nervous of toppling from our second floor balcony, so I try and reach for it with both feet planted firmly on the floor. Today, after months of trying, I finally managed to touch a sprig of leaves. I ate two, tiny tender leaves, savouring their bitterness, and then stroked the leaves that I could reach. I hope, today, that the tree knows that I love it!

When I was a young child, I loved my mother's cream cardigan. I knew the colour cream long before I knew the product. And therein lies my great befuddlement. We, my sister and I, were enchanted by the creams on my mother's dressing table, especially the vanishing cream. Who or what vanished? And did the cold cream make you feel cold? What were these creams for?????? Our young minds remained puzzled, despite our questions which were waved away by the grown ups. And these creams, too, were white, not cream, to our great chagrin.
Living in Delhi, the only dairy cream we ever used was an almost pure white.
The colour cream didn't make any sense to me.
The desi ghee we used, too, was white, as was white butter.

It was only much later, when we moved to Thailand and used golden ghee imported from Australia that the penny dropped!!!! The cream from cow's milk is cream coloured, hence the subsequent golden ghee. In Delhi, we were using buffalo milk products, all of which happen to be white!Mystery solved!