Today's the day to celebrate my Chacha.

I remember meeting him for the first time when I was about nine or so. Earlier meetings are way beyond the scope of my memory- I would have been far too young to remember anyone.

My father had been posted to England when I was two years old, and we returned to Delhi when I was eight. Chacha lived in Bhilai, in what was then Madhya Pradesh, now Chhattisgarh.
We had many 'aunts' and 'uncles' in our six years in London, but we wanted to know who our parents' actual brothers and sisters were. At the time, for us, my sister and I, they were strangers in the black and white photographs that were painstakingly air-mailed to our parents. Given the distance and the expense in those far off years, neither my mother nor father could attend their younger brothers' weddings, so the new additions to the family remained mysteries to them as well as to us. Our local aunties and uncles provided much support, kinship and friendship- our parents could travel to Europe for two weeks because one family insisted that they go, while they looked after my sister and I, which was wonderful, but they were not our parents' siblings............

But Chacha sounded exotic! It helped that he'd lived in Russia, and the 'cha cha cha' sound seemed like fun, too!

The first time that I remember meeting him was when he came to Delhi when his young son was about 15 months old, and Chacha would take us to the nearby park with him, and sing to him, Hum bhi agar bacchey hotey., and try to make the baby say 'shakarkandi'.  (He could say 'shakar' and 'kandi' separately, but not together!!!!!). I remember him coming to Delhi every couple of years with his family, bringing each new son as an infant or toddler, sometimes driving all the way from Bhilai, meeting various members of the family at different cities en route. These visits ensured a lasting bond between all of us cousins, which is something I cherish a great deal. We may not meet often, but when we do there is a level of closeness that goes back to our childhood.
We loved the visits when Chacha brought his car- we had glorious trips to the zoo, and various parks and monuments in Delhi, and I remember my sister and I attending a wonderful Ravi Shankar concert at Sir Shankarlal Hall with Chacha.

Chacha sings. He's often found humming, or singing to himself, and he's arguably the most tuneful member of our family. We share our love of classical music and old Hindi film songs and the eternal KL Saigal and many others.......
He writes, from his heart, mostly about his own life experiences. He hasn't posted much on his blog recently, but often writes for his local newspaper.
He is amazingly young at heart. He is tech savvy, and started his blog at the grand age of 77.
His laptop is a constant companion!
He has achieved a great deal in his life, yet is completely self-effacing.
He is fun to be around, and manages to be cheerful and positive even under the most difficult circumstances, of which he has faced several. He is disciplined and takes good care of himself, and is quite fit and active despite diabetes and aching knees. I pray that he continues to enjoy good health for many years to come.

The childhood memories are strong, but what is even more special to me is the bond between us that was forged much later, once the SRE and I returned to India in 1984 and were living in Lucknow.
Chacha visited us there a couple of times, his oldest son was married there, and somehow, over the years, we became allies. He and the SRE and my cousins all enjoy each others company.
Chacha has been an exemplary brother, insisting that my parents travel to Bhilai for Daddy's prostate surgery. Whenever my father was hospitalised, Chacha would drop everything and come and be with him, providing tremendous support to all of us. He even managed the paperwork for getting a refund of monies spent in hospital from Bharat Sarkar, which was tedious in the extreme. Once we came to  Kolkata, he and Chachi, (who is generous and wise and kind and deserves a post of her own) came to stay with my parents while the SRE took me on my first ever trip to the USA, where we were also visiting two of Chacha's sons. My mother would recall those three weeks with great joy and appreciation, as they'd never had that much  uninterrupted time together before or since.
I cannot forget the tears in Chacha's eyes when he visited my mother in the hospital, after her stroke.
He was a pillar of strength for us all after her demise, when he came again for the final Satsang.
That was the last time he met my father, as he was in the US when he passed away...........

In 2011, the SRE was going to be away for several days around Diwali, and suggested that I spend that time with our kids in Delhi. To me, though, it seemed an ideal time to go to Chacha's place- I'd last visited him decades ago, before we'd got married. I had a wonderful time and was thoroughly pampered by everyone! The photograph above was taken then. Last October the SRE accompanied me to Bhilai during the Puja vacation, during which we also went to Kanha National Park. When our young nephew in Nagpur died so suddenly last December, we travelled via Raipur and Bhilai, as getting a direct flight was impossible. Even spending those few hours at home was a great comfort to us at a very difficult time.

Chacha, all of this past year I had made grand plans of being with you on your eightieth birthday, being with you and all my dear ones in Bhilai, celebrating this great day together. Our sudden move to Noida made it too difficult to actualise, but I know you will understand. I thought of sending you a present, but sending you material objects seems meaningless. These words are completely inadequate, a poor attempt at sharing what you mean to me: an ally, a friend, a wise elder, someone I am so thankful to have in my life.......... 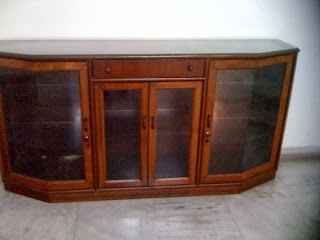 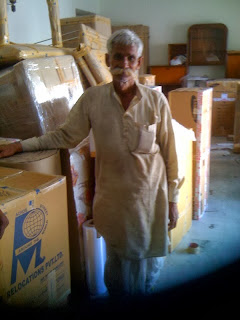 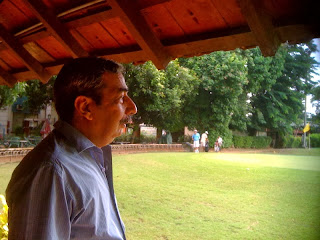