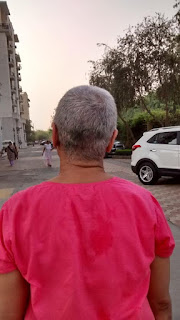 Although it may seem as though I'm going off at a complete tangent, my critique of the NCR's female morning walkers is germane to this narration. Even when we lived here some fifteen years ago, they seemed to be a notoriously unfriendly bunch, and even now, their general demeanour is blinkered, and eye contact is to be avoided at all costs. Some months ago I discovered a kindred soul, who actually looked me in the eye and smiled at me on our second or third encounter. It helped that she reminded me of a young friend of our family, with dark curly hair and a wide smile. Over the last few months my walk timings had become very erratic, and I hadn't seen this lady for a while, although I had seen her husband walking alone a couple of times. About a fortnight ago I see a slight, bald figure, approaching me with a smile, and I realize that it is my formerly dark haired 'acquaintance', with whom I have never yet exchanged a word. I instinctively ask her, 'All well?', and that marks the beginning of our friendship. Like me, she was also most irritated by the general unfriendliness of the walking community in our neighourhood, and was happy to find a kindred spirit. She had gone to Tirupati and had had her head shaved there. Thanks to what we now  think of as the blessings of Balaji, we are both delighted with our brand new friendship: something neither of us expected to find in our sixties. We are now happy, regular walkers who are actually walking an extra round or two when we have the time, delighted to find that we have so much in common!
Posted by dipali at 12:56 PM 8 comments: