It's a long post, but a wonderful one- please do check this out.
http://ssseth-gupshup.blogspot.com/2010/10/welcome-sunset-years.html
Posted by dipali at 9:49 AM No comments:

A Crocodile on the Nile! 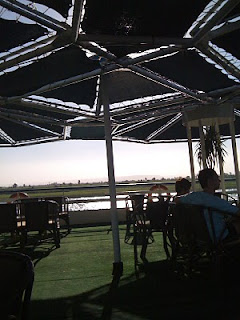 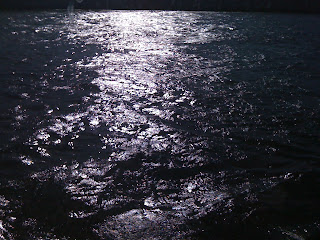 Sparkles on the water 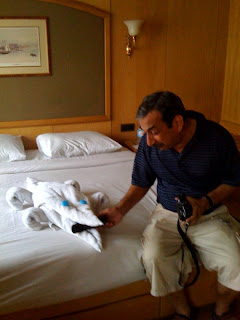 
That, my friends, was the only crocodile we encountered on the Nile. We spent four days cruising down the magnificent Nile, from Luxor to Aswan. Photographs are being sorted out very very slowly, but will follow soon.
We had a lovely room on board, with a large bed, a seating area, a fridge and TV (with hardly any channels, but enough for the SRE to have something to channel surf) plenty of wardrobe space, and, best of all, two bathrooms. Tiny, but one each!!!! What more can one ask for?
Posted by dipali at 10:21 AM 15 comments:

Manjul Bajaj's book, "Come, Before Evening Falls" has the distinction of being the first book I ordered from Flipkart!
That apart, I read it soon after our July visit to Bhutan, so the opening chapter, in which the founder of the village travels to Bhutan for the second time in his life (in what was then a journey of several months) immediately resonated with me.
(It was only on visiting Bhutan that I learned that it is a largely matrilineal society).
Set in the Haryana of a century ago, in a village that is named after a stud bull, Kala Saand, this book depicts rural Indian life with great authenticity.
The protagonist, young Jugni, orphaned at an early age, loves her home and her village, the beauty of the family's farmlands, and her beloved Dadi. Her widowed older uncle, her Tau, marries her Chachi when her younger uncle dies in battle. (The men of the Jat community mainly earn their living as farmers and as soldiers serving in the British army).
Tau is a leader in his village, and is progressive in his thinking. In order to improve the educational standards in his village school, he sends for a young master from another village. Raakha is an unhappy young man, the product of familial rape. He loathes his father and his aunt, and is always infuriated by the way in which his mother, his younger brother, and he are treated. His father is a rich landowner, favouring his other sons, and ignoring or refusing anything Raakha dreams of or aspires to do with his life. Raakha gets educated thanks to his maternal uncle ensuring that he goes, first to a gurukul, and then to college in Lahore.

Raakha is a progressive and enthusiastic teacher. He is also ambitious for others, and encourages Tau in his political ambitions, seeing himself in a more than advisory role in the future.
There are many social changes afoot- Tau's older son, Lena Singh, is stationed with the army in Bengal. Along with several fellowJat soldiers, he is planning to wear the janeu (sacred thread) in defiance of army diktat. His father feels that such a move would be unwise, and unfavourable to the community at large. Dadi agrees with him, because Guru Nanak refused to wear the janeu when it was offered to him.

It was lovely the way Dadi told that story, of Nanak at nine years, refusing the sacred thread. Beaten down by his stubborn refusal, his father's purohit had asked him at last what kind of thread the boy wanted and he had answered he wanted one made of the cotton of compassion, spun with the thread of contentment, with knots of continence and twists of truth.

Raakha, however, wondered what Nanak would have done if the janeu had been denied to him, rather than offered to him.Was it still your dharma to play according to the rules, to behave like a gentleman, when you knew the dice was loaded against you from the start?What was the duty of a rightful man in a wrongful world? Was it to douse one's anger or stoke it? Was he to speak soft words of logic asking for justice that no one would hear, or was he to stand on the pulpit, shout and raise a red flag of protest that everyone would notice from afar?

Jugni is initially repelled by and also attracted to Raakha. He soon comes to respect her clarity of thought and her integrity. Inevitably, the youngsters do fall in love. Jugni is tormented by opposing inner voices, wondering which voice is true to her real self. She is well aware that her relationship with Raakha is doomed even before it can begin- besides not having any land or wealth, he also belongs to the same gotra. In any case, she has grown up well aware of the dangers of love- one of her earliest memories is of her older cousin Sheilo crying out late one night to her mother to save her 'Maa manne bachha le! ' Jugni never sees her after that, nor is she ever referred to. She recalls other village girls who have committed suicide, having brought dishonour to their families. And yet, she and Raakha do share a deep, though clandestine friendship. When Raakha abuses his father, she stops him."He is your father, his blood flows in your veins.When you abuse him you dishonoour yourself..............Can't you see, Raakha, that your father is not here? The only person you are hurting in this moment is yourself."

The book moves at an even pace, depicting many interesting details of rural life a century ago, such as the special garments given to a bride, and the seven kinds of vessels that are given to her, the way a prospective bride's height is measured, and how she is critically examined for 'defects'.
The political atmosphere of the period is volatile.The Arya Samaj is an emerging influence. Many changes are afoot. Raakha's interior monologue when he receives his first quarter's salary, fifteen silver rupees, besides telling us what this not-so-princely sum can buy and cannot buy, also gives us a glimpse of city life.
In Lahore fifteen siver rupees would have bought him a pot of tea in fine porcelain cups with saucers on a silver tray and finely cut cucumber sandwiches, at the new restaurant off Mall Road..........Or it would buy him a bachelor night in Heera Mandi in the company of friends, good liquor and a clean whore.....

Each character is lovingly depicted with a light and sure touch. Jugni and Raakha, Dadi, Tau, Chachi, the various cousins, Raakha's long suffering mother, the barber's wife, the potter's daughter, all come vividly to life.

Beautifully crafted, (and also elegantly printed), Manjul Bajaj leads you through a rivetting story, to an ending which stuns you and leaves you gasping for breath. 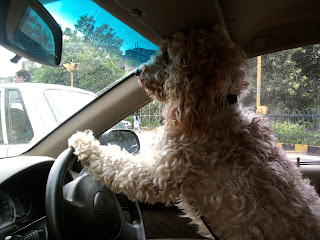 Parul's new book is expected to be out in November. Her second book, By the Water Cooler, follows her second baby who is a little over five months old.
Parul deals with motherhood and the resultant mayhem with great aplomb, and also manages to write books as well!
Her first book, Bringing Up Vasu, was a hilarious account of the trials and tribulations of early motherhood, and featured several unforgettable characters. (I live in mortal fear of getting as fat as the nanny who Had to Be Extricated from a Really Tight Spot). She and her spouse have bravely brought forth another baby, Ragini, whom she sometimes refers to as Raagu-face. Her monthly letters to her daughter are utterly delightful.
Parul is also hosting the following:
By The Water Cooler ContestPRIZES - Five autographed copies of By The Water Cooler are up for grabs. The five best entries will be decided by the esteemed M so please remember to pick up your grouses with him. 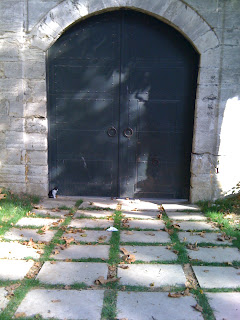 We got home last week, but are off again to celebrate my sister-in-law's golden anniversary.
Back next week.
Let me leave you with one of my favourite pictures from this trip- a kitten near a gate in the Topkapi Palace, Istanbul.
Posted by dipali at 2:50 PM 9 comments: