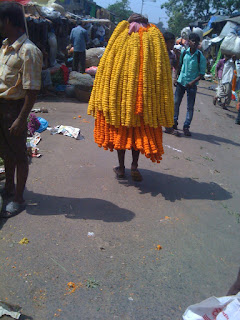 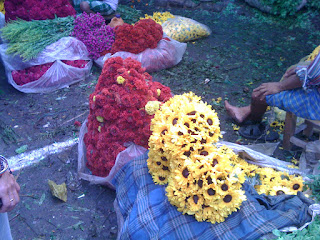 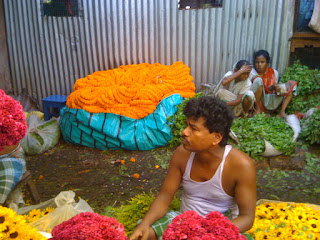 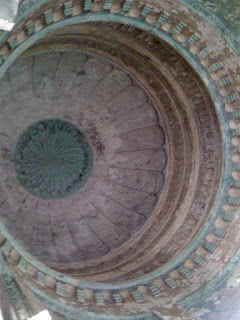 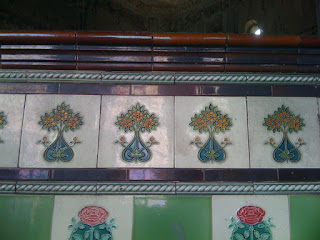 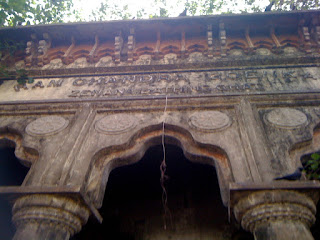 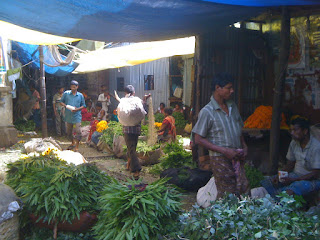 A dear friend and her daughter were visiting us. We managed to visit some places in Kolkata that I had not seen in my almost six years stay here, including the Mallick Ghat flower bazaar. (I had not heard of this either). We were quite fascinated by this large area on the banks of the Hooghly, where there were loads and loads of flowers, especially marigolds, in what seemed like a huge sabzi mandi, except that there were beautiful flowers instead of vegetables. An ancient looking building opening onto the river was found to be a ladies bathing ghat. I could imagine ladies from wealthy families being brought here in their carriages, attended to by maidservants while they took a dip in the river and came back into the domed, tiled and partitioned building to change their dripping clothes before they rode off again in their vehicles. Despite the heat, the humidity and the squishy leaves and debris underfoot, it was a great place to visit.
Posted by dipali at 9:34 PM 4 comments:

Entertaining, thought provoking, delightfully Dilli- Lajpat Nagar vs. C.R.Park.
An infertility specialist who talks about the 'strass' of modern urban life.
A delightful saas-bahu combo who drown their sorrows together most nights.
A lead pair who are made for their roles.
Very authentic people, lifestyles, even cliches!
Great humour, as well as sensitivity.
We just might watch it again!

I learned about this delightful initiative in Hyderabad from my friend utbtkids.
I am briefly quoting her here:

"Treasure House can be called a children’s library, but the thing is, it is much more than just a library. When you are there you feel the 7000+ books being carefully cataloged and cared for, the bright and spacious rooms inviting you, the amazing art studio inspiring you. You will feel like bringing you child and just being there, reading and participating in the programs they offer. If you live in Hyderabad, check it out, you will love it.

This is where I am to be found this summer, if you are looking me that is

I am designing a Summer Reading Program for TreasureHouse.

The program is called Reading Bugs.

Do visit her blog and the Treasure House site to learn more about this exciting initiative.

Sexual abusers of children seem to be present all across the social spectrum, they are of all ages, education levels, and may have varied relationships with the abused. It seems difficult to pinpoint the possible causes for such repugnant behaviour. At a gut level, one feels that either the abusers have been abused/bullied in their own lives, or have witnessed abusive relationships in their own childhood. There is, however, little hard evidence to substantiate this.

In this post I am citing three examples from recent literature and a movie, which illustrate the nature of particular incidents of CSA. The first example also reveals the antecedents of the abuser.

In Manju Kapur's book 'Home'- the protagonist, Nisha, is abused by her cousin Vicky while he ostensibly baby-sits her or plays with her on the terrace. Vicky is Nisha's paternal aunt's (Bua's) son, and he has been brought to live with his grandfather's extended family after the tragic death of his mother, in what was said to be a kitchen 'accident.' Vicky's father, an abusive lout, seems to be well rid of his son. An insecure, unloved boy, not really welcome in his new home, also dealing with burgeoning adolescence, Vicky seems to find some joy in contact with an innocent young cousin. Despite some suspicions afloat in the family, these are never verbalised. Rather than confront Vicky with his misdeeds, a traumatised Nisha is sent to live with her aunt, where she will be safe. Unfortunately, and inevitably, the young Nisha's tender psyche is deeply affected by these sexual explorations, and her first romance as a college student leaves her feeling guilty and besmirched when the liaison doesn't culminate in marriage. She develops a skin condition which plagues her for years.

In this scenario we understand that Vicky himself is severely damaged, and merely bringing him into the shelter of his maternal grandfather's home does not help heal his deeply wounded psyche.
He is well aware that what he is doing is wrong, and yet cannot stop exploiting young Nisha as long as he has the opportunity to do so.

In other stories, however, where the abuser appears as a fully formed adult, one can only guess at his motives to exploit the young and innocent. In The God of Small Things, the Orangedrink Lemondrink man simply takes advantage of the situation in which young Estha finds himself alone in the foyer of the movie theatre. The terror that the young child feels leads to tragedy.
Abusers such as this appear in the novel fully formed, with no inputs that tell us where they are coming from.

In the movie Monsoon Wedding, the bride's cousin Ria breaks down and talks of her own childhood abuse at the hands of her uncle, her late father's sister's husband, Tej Puri, when she sees him making similar overtures to a much younger cousin. Tej Puri is a wealthy and powerful man who has helped his wife's brothers during difficult times. His wife is outraged, and condemns her niece as a liar. For me, the most moving passage in the film is the scene on the following day, the day of the wedding, where Ria's uncle, the bride's father, tells his brother-in-law that he believes what Ria says, and asks him to leave his house. This is a scenario which is wonderful to see because it may not often be seen in real life. Families hush up 'these things', no one talks about them, and a cloak of secrecy usually permits the abuser to carry on with his perverted behaviour, especially if he is a powerful man or a benefactor of the family.

And yet, so many many people who have had difficult or traumatic or abusive childhoods do not, thankfully, go down this road. They learn to respect boundaries. Their moral code will not allow them to see the young as objects of lust.

As parents, besides protecting our children from sexual predators, we also need to ensure that they are well socialized insofar as other people's boundaries are concerned. Concepts of personal space, respect, appropriate touching, especially of members of the opposite sex, all need to be instilled. Our children also need to have sufficient affectionate physical contact with their own parents and siblings so that they are not desperate for physical contact, which can make them vulnerable to sexual predators.

There are no simple answers. What we can do to prevent our children from exploiting others in their own lives is, perhaps, simpler. If the family operates in terms of mutual love and respect, with zero tolerance of bullying and exploitation of others, perhaps we will get somewhere. In the meantime, however, we have to keep our children safe.
Posted by dipali at 1:05 AM 3 comments:

The Brilliance of Moi- Part Deux

I amused myself quite thoroughly with my brilliance last March. It seems to be seasonal, since I did something equally brilliant today, just a few days later to the year!
I had to telephone a cousin in Delhi, whose number was not stored on my cell phone.
I took out my diary, looked up the number and dialled, only to be told that the number did not exist.
I then called up the cousin's sibling, who asked me to note down the number.
It looked very similar to the number I had dialled, in fact it was the very same number. Apart from the STD code, that is.

I had been trying to dial a Delhi number with the Kolkata STD code.
Posted by dipali at 8:25 PM 5 comments: