Made for Each Other aka Dumb and Dumber

A friend gave us complimentary tickets for the film 'Tees Maar Khan', so we went to see it this Sunday evening. The less said about the film, the better. Inane might be sufficiently descriptive.

We had a good Chinese meal in a restaurant in the mall. Of course the SRE had to mildly annoy me by constantly checking on the messages on his phone- a part of him is always at work! While driving down from our third floor parking spot, my cell phone rang. The call was from the SRE, who was sitting next to me, driving the car. I disconnected and laughed, "Why is your phone calling me? Very strange."
It rang again. I disconnected it again, wondering at the vagaries of mobile phones.
In the meantime, the SRE checked his pockets, and realised that he had left his phone in the restaurant. I called his number and was answered promptly by the restaurant manager. Since we were halfway down the slope, I told the SRE to proceed downwards while I rushed back to the restaurant, and gratefully received the man's Blackberry from the smiling manager.
Now how did he know what my number was? The SRE has listed me as 'Wife', and since I had gone out alone that morning, we had exchanged a few calls, so 'Wife' was up there in the recent calls!

I don't know if this particular restaurant is jinxed. The SRE had dined there with a colleague after watching a film while I was away earlier this month, and had left his car keys there, and had a merry time looking for them........

Quite apart from this joint stupidity, we had a great time at my niece's wedding. On our second morning there, while waiting at my sister's house for the rest of the family to assemble for the havan, some of us were sitting around after having had tea, when I thought that the contents of the huge fruit basket sitting on the dining table should be used. So a niece and I peeled some oranges, someone chopped up some guavas and served them with chaat masala, some grapes were washed and served. The dozen or so people assembled there were all enjoying this 'fruitful' session, when the SRE plaintively asked if I'd promise not to laugh at him if he told me what he really wanted to eat just then. Of course I never promise not to laugh at him, but I did ask him to speak up! What he wanted to eat was mooli, the white radishes that are an integral part of a North Indian winter. My sister had none at home, but the neighbourhood Mother Dairy vegetable vendor was barely five minutes away. An expedition was mounted, consisting of the SRE and spouse, a cousin's daughter, her six year old son, and the cousin's young daughter-in-law. A couple of kilos of radishes, a few slender carrots and some fat juicy limes were procured. Two large platefuls were served, one with chaat masala, one with salt and pepper. Happy munching over, it was time for the havan to commence.

Long may the SRE come up with wishes that are so easy to fulfill!
Posted by dipali at 8:46 AM 19 comments:

December is a busy month

There's a whole lot that has already happened- a golden anniversary (my oldest cousin's); a cousin's daughter's wedding was held on the same day, so I missed that and attended the reception in Kolkata along with the bride's parents and brother, who stayed with me. Then the merry visit of some close friends. The SRE was travelling, and also did these ridiculous day trips, which involve getting up at unearthly hours for him to catch the first flight of the day, and coming back late the same evening. And if these trips occur on a Sunday I most strongly disapprove. (I still get up and make him a cup of tea, though).
We are leaving for my niece's wedding tomorrow, and will be back after a week.
Let us see what the tail end of the year holds for us all.
Au revoir, my gentle readers. Take care.
Posted by dipali at 11:44 PM 6 comments: 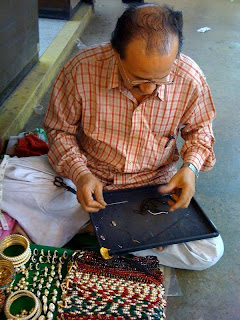 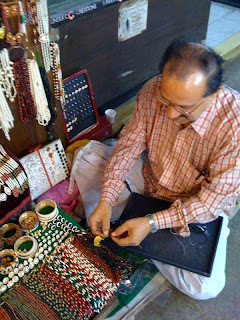 The 'patua', or jewellery stringer, is still part of the North Indian market scene. New Market in Kolkata has a few patuas, usually sitting outside large jewellery shops. Not only do they string your pieces for you, they also have a large array of colourful necklaces and bangles and earrings for sale.
On a recent visit to the patua, I sat on a small stool and gazed in fascination while he did my work. I have a beautiful black and gold pendant, strung onto golden thread which had become dull with use. I planned to have it put onto thin strands of tiny black beads. The patua first measured out the length I wanted, and told me how much it would cost. Then he slipped what looked like a crooked curtain ring onto his big toe, essentially a large hook, on which he pulled out sufficient lengths of black thread. He then slipped my pendant onto a nail on his work table, and attached the threads to both hooks. What was totally fascinating was how he transferred the tiny black beads from their original white thread to the black thread. You'd think it would be a lengthy process involving a very fine needle and eye-straining concentration. But no! The man clipped and then combed out, with his fingers, the ends of both threads, twined them together, and simply pushed the requisite length of black beads onto the locket thread. He repeated this process several times, and then fixed the strings and pendant onto the closing tassel. All this in between dealing with customers who were looking at and buying his 'pearl' bracelets and necklaces, answering his mobile phone, and drinking tea! His work space is actually tiny, perhaps six feet square, with a neat display of ready products, plus bundles and boxes of the materials needed for his trade. He has to dig through many bundles to find what he needs, but does so with equanimity, knowing that he has all that he requires.
When I asked him if I could take a photograph of him, he readily agreed, saying that many foreigners have photographed him.

Some of our traditional craftsmen, like the local dyers, (the rangrez of so many classical bandishes) make our lives so colourful and so simple, and, of course, do not charge very much money. Long may they prosper!
Posted by dipali at 7:39 AM 13 comments: