Why are you still here??? 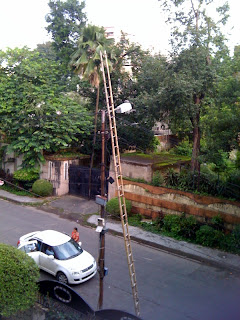 This ladder, propped up on a lamppost outside our compound wall, has been around for about ten days now. It is standing tall, just outside my bedroom balcony, perhaps a good twenty feet away, but nonetheless impinging upon my visual space.
Please go away soon, Mr. Ladder. Doesn't your owner want you any more? Don't you have any other important work to do?
Or is it just me, getting annoyed by an inanimate object well outside my orbit?

Our travelling shoes seem firmly stuck to our feet.
The SRE and I spent the weekend before this in Gorgeous Goa, where we couldn't meet the wonderful Aneela, who was celebrating Eid out there, ( but then we were in Delhi this weekend, so we did meet her).
Our Goa trip was for the SRE's IIT batch reunuion, and a fine, frolicsome time was had by all. We had planned to spend an extra day in Goa, but the powers-that-be decided that the SRE 's presence was required elsewhere, so I actually spent the extra time all by myself, which wasn't bad at all. 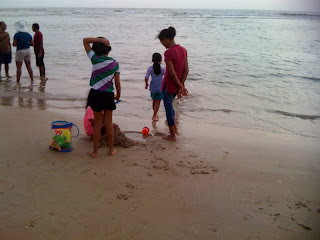 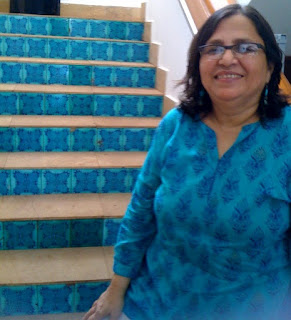 I must tell you, gentle readers, how inspiring some of the SRE's batchmates are. One of them started learning Hindustani classical vocal music after he turned fifty, and is, within the space of 8-9 years, most adept. All of us thoroughly enjoyed the recital he gave us, and wished it had been longer.
Another one is treating patients, with great success, through an alternate healing system known as Su Jok. There are too many stories to share here. Mostly,though,  we were busy having fun, catching up, and forgetting that all of us were in our late-ish fifties!

Three nights and two days after our return from Goa (we both returned to Kolkata on Tuesday evening) we went to Delhi for some important personal work.We got back late last night, glad to be home again!


Of course I remembered Lalita on the 26th- it's been four years without her, four years of remembering her with or without reason- the turn of a phrase, the shape of a head, a voice, a crossword clue, a place we visited together, anything can remind me of this friend who was part of my life for so short a while. I miss you. There is so much I would have enjoyed sharing with you.

My blog will be five years old tomorrow. God bless you, dear blog. May you continue to enrich my life for many many years to come.
Posted by dipali at 7:31 PM 9 comments:

I'd recently blogged about Yashodhara Lal's delightful book, Just Married, Please Excuse, and I'm sure many of you, my gentle readers, have read it and enjoyed it thoroughly. Yashodhara is hosting a contest through the month of August, and though there's not a lot of August left, here goes!


Although we had been courting for about a year, our actual wedding was arranged in a hurry as the SRE had taken up a posting abroad and had to join within two short weeks. So there were several glitches and absentees, no printed wedding invitations, a change of timing at the venue, which led to a very significant member of his family strolling in with her kids after the ceremony was over, but let me not digress......

We got married in Delhi, and were leaving the next day for my mother-in-law's home in Agra. The SRE's middle sister was based in Delhi, and so her home was the venue for the baraat. We were both quite reluctant to spend our wedding night in the midst of a house full of relatives, so the SRE decided that we would stay at the Lodhi Hotel for that night. We'd had, unusually for non-Sikh North Indians, a morning wedding followed by lunch. In the evening it was decided that we would go and pay the ritual visit to my parents, visit a cousin of mine who'd had recent surgery and so could not attend the wedding, visit another old friend of mine who hadn't been able to attend the ceremony, and then book our hotel room. After these visits, all of which were fortunately in South Delhi, we would go back to Didi's house for dinner, and then leave for the night. The SRE's uncle, who was a senior official in a small mining town, had an official car at his disposal, which he very kindly lent us. Three of the visits were uneventful. At the Lodhi Hotel, however, the two newly married geniuses, having emerged from the hotel lobby after booking their room, realised that they had no idea of which car they had been travelling in all this while. All we knew was that it was an Ambassador, at a time when most cars in India were either Ambassadors or Fiats, with the occasional Standard Herald thrown in for variety. The parking lot was full of Ambassadors. We weren't quite sure of the colour, either. We didn't know the driver's name. There was no such thing as a cell phone in those days. We walked up and down the parking lot, hoping that the driver would spot us and come up to us, but no such luck.
We pondered and puzzled over the Mystery of the Missing Car, with no solution in sight. We didn't want to call up the uncle and ask him, because a) we didn't want to look stupid (which of course we were) and b) he may not have known the car number himself! Finally, and most reluctantly, we asked the doorman to call for Mr.Taneja's car which had come from Sarvodaya Enclave, and to our utter relief, the relevant Ambassador trundled up to us!

We've lost many many things in the intervening years, including our tempers, money, the older son in a mall in Bangkok, (whom we luckily managed to find), books, papers, you name it, we can lose it. But you can rest assured that we haven't ever lost a car again!
Posted by dipali at 7:53 AM 12 comments:

For a young man I never knew

You are no more,
A young man I never knew,
Yet knew of as part of
a dear friend's family

Learning of your death
shook me up in many ways
I grieved for you, your family
All those who loved you
And yet whose love
was not enough
to conquer your despair

The darkness of your end
showed me light:
my love needs to reach
those I care for,
Unblocked by rage, resentment
and an unwillingness to forgive.
It needs to flow in open channels
Reaching all whom I care for

Let me not add to the grief in this world
I pray, through thought, word or deed
Let love, joy and peace be mine,
Enough to have, enough to give


May your soul rest in eternal peace.
I thank you for helping restore mine.
Rest in peace, I pray.
May your loved ones be blessed with peace. 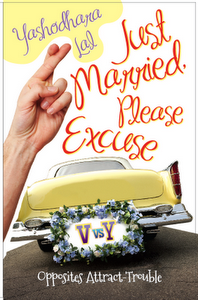 Finally, the SRE and I decide to get a yoga teacher to come and give us both lessons.
We know that we lack the discipline to exercise on our own, despite our golf and walks, respectively, with which we are more or less regular.
Our teacher started our classes last Thursday. He gives us customised, separate lessons, based on our physical status and individual health issues.
The SRE is much lighter and lither than I am- the following are my personal experiences.
Deceptively slow and easy moves, mostly.
The discovery of many many new sets of muscles, which were quite sore after being woken from their perennial slumber. Thursday and Friday were agony. We relaxed over the weekend, and now, after a walk plus yoga, there are hardly any aches and pains. I did have a two hour siesta this afternoon, though.
It feels wonderful to learn something new.
Yayyyyyy yoga!
Posted by dipali at 6:40 PM 4 comments: