Gifts from our children! 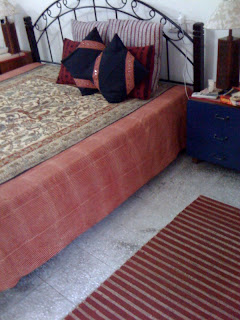 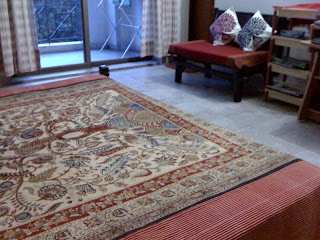 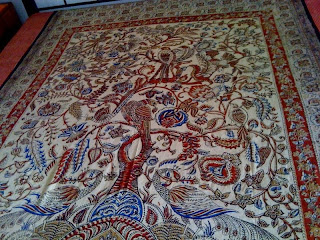 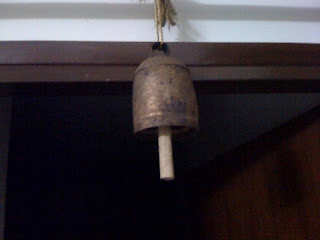 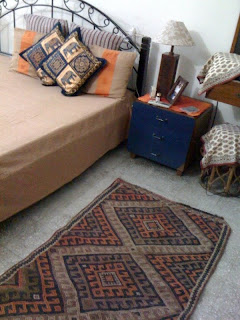 Besides the indescribable, non-material gifts our children give us, they sometimes give us beautiful material objects as well!
My daughters fell for this beautiful kalamkari bed cover, and brought it for us on their last visit. Although it was intended to be a divan cover, I thought it far too beautiful to not be in our bedroom, so I added block-printed panels to the sides, and voila! The tree of life cushion covers on the bench are from Tilonia, bought years ago at an exhibition in Chennai. (The bedside lamps, from Fabindia, were also given to us by our older daughter, who was tired of the mismatched lamps we'd been using. I had to replace the lampshades, after melting the original ones with high-wattage bulbs! The photo frame in the last photo is a gift from The Mad Momma).
When my sons went on a brotherly trip to Goa last year, they brought us this beautiful bronze bell which hangs on the curtain rod outside our room, among other interesting things. It has a lovely deep tone, and both the tall sons often manage to ring it quite unintentionally!
The older son also bought us this extraordinary Azeri rug from Isfahan, on his recent trip to Iran. I find the design and weave most unusual, and love the muted colours.The elephant print cushion covers are from Jim Thompson, and were given to me by Moppet's Mom when we visited her in Thailand in 2008.
Our children's gifts make them a constant presence in our home, even though they are rarely physically with us! God bless you all.
Posted by dipali at 8:24 AM 21 comments: 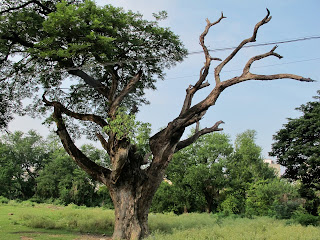 This beautiful rain tree is part of my morning walk route. I wonder what happened to it, and when. It looks as though it had been struck by lightning. Despite the damage and the dead half, it is still vibrant and alive. The dead part is now hosting another plant.
I love this tree.

For the Tulika Blogathon 4

The two rhymes that follow are from my husband's community, and are in Derewali, the language spoken in Dera Ismail Khan, across the Indus, part of what was formerly known as the North West Frontier Province.

The boy jumps and jumps
Asking for his Maama's daughter
But Maama doesn't give his daughter
Chacha offers his
But she is blind in one eye
So he will get a red cheeked Pathan girl.

ABC
Where have you been
The headmaster's dead
I went to mourn. 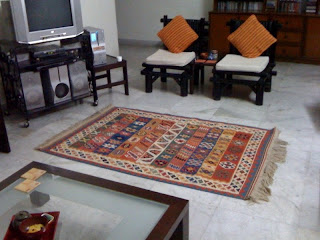 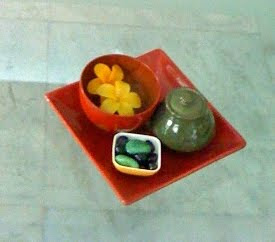 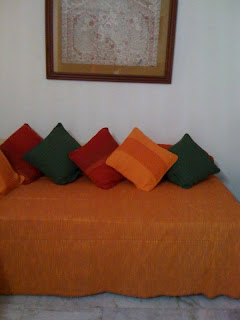 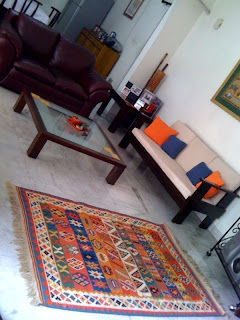 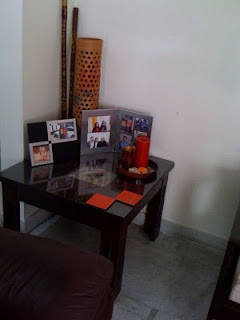 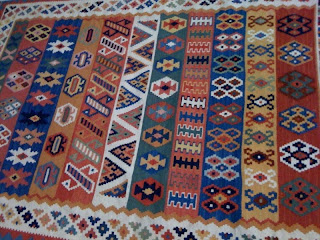 My older son brought me this beautiful rug from Iran on this visit.
It is so lovely that a) I had to decorate my room around it, and b) I had to show it you, my gentle readers.
The divan is in the dining room. The long carved sticks you see on the corner table are whistling sticks from Bhopal- you twirl them around at speed and they whistle!

My major sins against gender stereotypes are the ones I have committed as a mother, in bringing up my children. This was despite having a rather domestically challenged husband, whose 'challengedness' can be attributed to a)having three older sisters and b) being in a boarding school/college since he was ten years old, and c) being too absent minded for his own good! He still does make the occasional cup of tea, and is a non-fussy diner.

My girls have been brought up to be competent human beings, who can deal with whatever the world and life throws at them. Both of them are independent people and live life on their own terms.
My boys have been brought up the same way. As they grew older, they were expected to do various chores around the house. Laying the table for dinner and making tea for me in the evening was just a part of their routine. (They can be incredibly lazy bums at times, and my older son has even kept the blender jar in the freezer after making cold coffee, and on one occasion made rice without washing it first). I never even thought of this as anything unusual, until a Malayalee guest who'd come home for dinner expressed her shock and awe at the sight of a teenage son of the house laying the table. (This was perhaps twelve years ago).

Life skills are independent of gender and must be imparted, insofar as possible, to every child.
All children should grow up to be reasonably competent human beings, capable of fulfilling their survival needs on their own. Restricting them to roles stereotyped by gender is doing them a great disservice.

Edited to add: I had written something on the same theme some months ago. http://dipalitaneja.blogspot.com/2010/02/irrelevance-of-gender-in-everyday-life.html
Posted by dipali at 9:41 AM 11 comments:

One of my earliest memories of dissent with the SRE goes back some three decades or so. The man was sulking and did not talk to me properly for three or four days. I was extremely miserable, and tried my level best to find out what was bothering him. With great difficulty, he finally disclosed all- one of his shirts had a cuff button missing. I could have cheerfully clobbered him for being so utterly stupid about something so trivial. Firstly, I did and do believe that all grown up human beings should have the skill to sew on their buttons. Secondly, if he did not possess the necessary skills to do so, why could he not speak up and ask for the damn button to be replaced? Mind reading is not a necessary by-product of love. Many shirts and buttons and squabbles later, though, much has changed in the SRE-Dipali household.

Digression- the SRE would always sleep in a kurta-pyjama, preferably white, and preferably ironed. As long as we lived in Lucknow, this was never a problem, since we had a press-wallah dhobi living in our garage, who did all our ironing in lieu of rent. As our children grew up and away, and more aware of the world around them, Fabindia kurtas were discovered and adopted.
In 2005 we were going to Goa on a vacation with some of the SRE's college batch mates, and our younger daughter came to stay with my parents while we were away. On a shopping trip to Chennai, she insisted that the SRE buy some shorts and t-shirts for his holiday. Till then, the SRE never wore short sleeves or t-shirts. So that vacation marked the beginning of an era, as well as the end of one.

It so happens that middle age often brings about a phenomenon known politely as middle aged spread, and less politely as a paunch. This anatomical feature makes the force of gravity on pyjamas stronger than before, which leads to grubby pyjama hems which also tend to unravel. Over the past few months, several pyjamas revealed unravelling hems. Some new ones had been bought, but needed to be altered to the correct length. Given that I was extremely preoccupied with my parents over the past several months, the pile of mending kept growing and was just not tackled. The SRE was mostly sleeping in shorts. One night, recently, he said very gently, that he would like to sleep in pyjamas sometimes. I realised, to my utter chagrin, that all his pyjamas had landed up in the mending pile. He even suggested that I outsource the repairs.

The very next day I set up my sewing machine and mended for an entire morning. Not only pyjamas, many of my salwars needed their waistbands stitched up. Since all these clothes had been sitting around in various piles for months, I washed them all and ironed some pyjamas. The SRE now has a respectable pile of pyjamas in his wardrobe, and will wear shorts to bed when he feels like it, and not because he has to.

I think about the SRE's long journey from sulky silence to patient forbearance, and thank the good Lord for giving me this wonderful partner on the journey of my life.
Posted by dipali at 9:48 PM 12 comments:

My sins against gender stereotypes

Starry has tagged me to list at least ten things you have ever wanted or done which your gender is not supposed to.

I'm not really sure what either gender is supposed to do or not do, as I never grew up with such notions. My brother had left home before I could perceive any great difference in our roles, and my father did all kinds of things, including chopping vegetables and shelling peas and cleaning bathrooms, as well as painting walls and cycling to office. Also, Enid Blyton's Famous Five was part of our growing up years, so tomboyish interests were reinforced by George's character.
My mother did try to instill some lady like traits, but I don't think she got very far.

I. I climbed trees well into my teens. I still would if I could!
2. I whistle. Quite tunefully, when I'm in form.
3. I rode a bicycle well into my forties. (That too, a male version- used to pinch my son's bike for an early morning chukker). Now I have no accessible bike- maybe I should get me a lady-like one for my old age!
4. I've eaten out alone, in fast food places, and in malls, because I'd rather eat alone than starve when I've been out for hours. I might just take myself to a good place for the pleasure of it, one of these days.
5. I've watched two movies alone, and intend to see more.
6. Although I've made good friends on my morning walks here in Kolkata, my walking is not dependent on them. I've walked alone quite happily for years and years.
7. I'm the handy person in my house- hammering nails, making minor repairs where possible.
I used to clean the ceiling fans till I fractured my wrist. I still change the curtains myself.
8. I sometimes swear like a trooper, under extreme provocation.
9. I enjoy looking at pretty girls:)
10.I used to wrestle with my older son when he was eleven or so.
11. Pushed our old Ambassador when it wouldn't start.
12. Had a childhood fantasy of being a motor mechanic. I also collected various odd tools and bits and pieces which I loved fooling around with. I also played with dolls, and loved being a veggie seller as well:)

My heartfelt thanks to all of you who sent your sympathies and condolences, and my apologies for not acknowledging them individually.