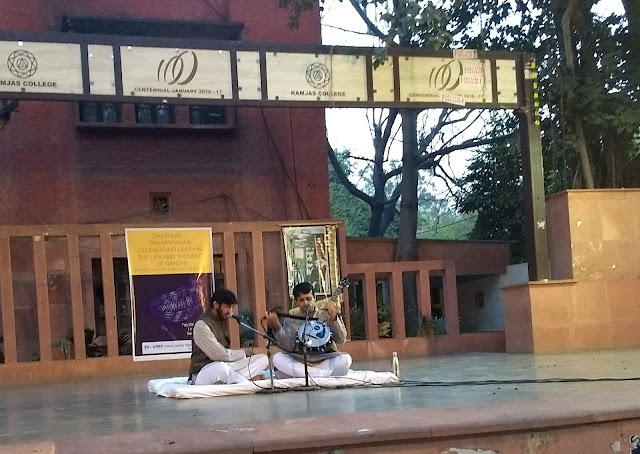 Posted by dipali at 2:35 PM No comments:

I first heard of Ashaji from my older daughter, a little over a year ago. I was on my way home after watching an amazing, brilliant, heartwarming play. (Contempt, by Danish Shaikh). A friend of a friend of a friend of my daughter was looking for someone to write/ghostwrite his mother’s memoir. My daughter’s friend had read my book, Of This and That, and felt that I might be the person who could do this.
It sounded interesting, and challenging, because I had never done anything like this before. But since my older son and his family were in town for the year, I also wanted to be free to spend time with my grandchildren. However, Ashaji sounded interesting: a lady who had lead a glamorous life as an air force officer’s wife, who had worked in the hotel industry, who had divorced her husband, remarried, divorced the second husband and went back to the first, and then became deeply involved in the spiritual life, and also did a great deal of social service. She happened to be suffering from a relapse of cancer, five years after the first bout, and her son felt that she must record her story for posterity, especially for her grandsons. Her husband had passed away early in 2017, and her older son had passed away as a young man decades earlier, so she was the chief repository of the family’s older memories.
A few weeks elapsed before I heard from her son. He was based in London, but did come to India to spend time with his mother. We spoke at length over the phone, and then we met. He was trying hard to convince his mother to agree to this memoir, which was no easy task. She finally did agree to meet me at a mutually convenient time. I reached her home, which was a short car-ride away from mine. Ashaji was a petite, short-haired lady of indeterminate age. We had a very casual conversation that first day, just to establish a rapport, and Ashaji was, as always, very hospitable. She seemed to be in reasonably good health at the time, and I found it hard to accept that she was terminally ill. She didn’t really feel that her life or achievements were in any way noteworthy, but was willing to give it a shot.  (My husband was the one who knew that it wasn’t going to remain an easy situation: he could anticipate the pain of loss that I underwent several months later). In the meantime, he bought me a voice recorder to help me with my work. I would meet Ashaji twice a week, on an average. I would have a list of questions for her, on a particular aspect of her life that I wanted to know more about.  She also gave me the telephone numbers of people who knew her well, and I was able to conduct some personal interviews and some on the telephone. A pattern was emerging, and slowly she also began to believe in our project. She was very frank and forthright about her life. It was a remarkable life indeed, especially her seva journey which was marked by her dedication, generosity, managerial qualities, and her willingness to put in great efforts of her own, as well as motivating others to do so as well. After various spiritual experiences, she was now a staunch devotee of Shri Sathya Sai Baba. When she went to London for a few weeks, we remained in touch, and on her return we resumed our frequent meetings.

Her warmth and kindness invited confidences. There were days when we would simply chat together as friends. She planned to visit me at my home some day. She always insisted that her driver drop me home on the days I came by taxi. If ever a scheduled meeting couldn’t take place she would phone, most apologetically, and we would fix up another date and time. We spent hours going through stacks of photographs, trying to shortlist what seemed useful for the book. Voices acquired faces, and her family and friends all became people that I felt I knew!

And then, towards the end of October, the disease struck, hard. Her son, purely fortuitously, was in the city. Perhaps it was ordained that he was there to look after his mother at such a critical juncture. Along with all the medical arrangements, he and a friend of his also managed to put the book into the shape he desired. I managed to do a final interview with Ashaji on the 14th November, in her hospital room, and they had some copies of the book ready for her 77th birthday on the 20th November. She came home from the hospital around the 22nd. I went to visit her on the evening of the 27th, but couldn’t meet her as she had had a very bad night, and had just dosed off. On the morning of the 30th, I had a dental appointment. As I came out of the clinic, I felt an overpowering urge to go and see Ashaji. When I rang the bell, an unfamiliar person answered the door. I asked about Ashaji. She had passed away the previous evening. Her body was laid out, beautiful in eternal peace, in a refrigerated glass container. Sai Baba bhajans played softly in the background. Her son sat on the staircase. He insisted that I have a cup of tea. It seemed fitting to have one final cup of tea in Ashaji’s presence…

It now seems unreal, this intense interaction over eight brief months. But I do have pages and pages of notes, her voice on the voice recorder, and a copy of the book, a testimony to this remarkable, affectionate, courageous and generous soul. I am glad that I had the privilege of knowing her.