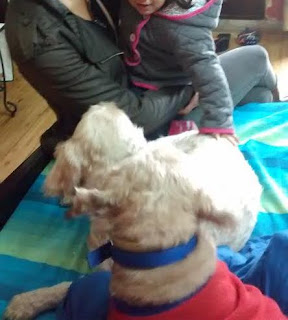 Two hours later, she wakes up again. Bringing her to our bed didn't seem to be a viable option. The desperate parents had put a mattress on the floor of her room, so that whoever was on baby shift could get some sleep. (The minute they brought her to their bed, she'd want to play). It made sense to just be in the room with her, rather than march across the whole house in the watches of the night. Sleeping on the floor wasn't brilliantly comfortable, but some sleep was better than none. If the baby cried in her crib, I'd pick her up and cuddle her, and sometimes she'd sleep, sometimes she'd try and wander off in the dark, which was unnerving, so I'd pop her back into her crib. We did this several times through the night. Each time I flipped open my phone to check the time, the young lady would admire the pa(n)khaa. When I took her out of her crib at around 6.30 a.m., she toddled off to the window and pulled back the curtain very dramatically, as if to say,
" Look- it's daylight now. Do not try and make me sleep anymore, Grandma."
I had no intentions of doing so. I was quite happy taking her out-thide the room!
Posted by dipali at 8:48 PM 2 comments: 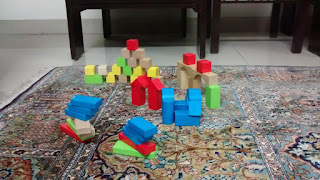 My Big People take me
wherever they want to
when they want to
in cars (car seat, strapped in)
strollers (strapped in)
airplanes (seat belts)
and they tell me things
(where I'm going,
whom I will meet there,
the wonderful things I'll see)
and try and comfort me,
but I only want to be free
to run, and play,
and move,
unstrapped, free.

After lots of straps
and restraints
and loud noises
and bright lights
and lots of people
and lines of people
and funny feelings in my ears
and my Big People waiting
near a strange moving thing
with lots of bags and cases,
me in my stroller,
we come to where
some more big people
hug mine, and talk to them
and we all go to
a place with lots of cars
and my Big People fix
my car seat into a car
and my stroller goes
into another car
and the other big people
smile at me, and talk to me
but gently, softly, giving me
time and space to know them.
Baba gives me some milk
and water on the way,
and I see lots of lights
which I love.

And then, at last,
I'm out of the car seat
my Baba carries me
into a shiny box,
and I can see
another Baba Person
holding a Small Person
who looks like me
Is it? Or not?

Before I can figure it out,
doors open, more doors open
and I'm in my Dadu's house
And I run, and I dance
And I skip about
Into some rooms,
Through some curtains
and out again.....
On to a soft carpet
And I dance in delight
Free once more,
Happy and free once more......