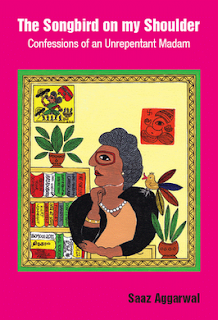 Not just sweet. Also acerbic, hilarious, poignant, moving, spiritual, philosophical- so many flavours to Saaz Aggarwal's writing.
After reading her book, I wanted to meet the author, and tell her all the places in her book where I went 'Oh', and where I chuckled, and where I could say, yes, I know what that feels like, that is a pain that I'm familiar with, that is a joy that I've felt too!
I'd read some of her articles in Open magazine, notably the ones referring to her father's valiant battle with Parkinson's disease, and her sorrow at being away from her parents, in boarding school as a young child, among others.
Her poems speak to me.
Her world is familiar, and yet uniquely hers.
Somewhere, though, the Songbird strikes a familiar chord.
Whether I ever meet Saaz Aggarwal or not, I feel that I've found a friend.
You can read some of her stuff on the Songbird's very own blog.
Posted by dipali at 6:22 PM 5 comments: 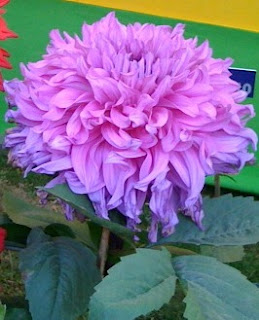 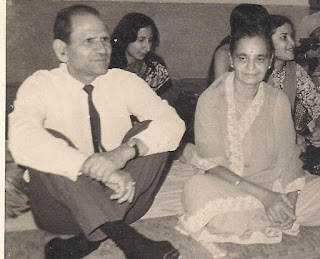 The colour mauve was one of my mother's favourites.
Seeing various shades of mauve at the flower show this afternoon reminded me of some of her favourite sarees.
When I was a young child, nylon georgette was very exclusive.
Since we were living in London till the early sixties, we had access to Japanese synthetics- the good quality nylon georgettes had a code number- I think it was 644.
The first one that I remember had sprays of deep purple flowers along the lower half of the saree. The second one was sent to us later, when we had moved back to Delhi, and was mauve with a very fine print of deep purple half-circles, like protractors, with delicate traceries of whirls and whorls all through. I know she had many other sarees, but these two stand out in my memory, through most of my school and college years!
The third, the most formal of all, was a pure French chiffon, onto which my mother stitched a beautiful cream lace border. (Among other occasions, she also wore this for our wedding).
Mauve is not one of the colours I usually wear, but it never fails to remind me of my mother.
Posted by dipali at 7:50 PM 14 comments:

While walking each morning,
I see the same yellow cab parked
at the head of the very last lane
on my route.

A young couple
(whom I rarely see)
are regular, daily passengers.

The old Sikh taxi driver,
grey beard flowing,
sits at the steering wheel
and reads his prayer book,
oblivious to the world around him,
so very peaceful.
Posted by dipali at 7:06 AM 4 comments:

It washes over me,
and passes
leaving me drained,
aware that it can
strike at will.
Posted by dipali at 8:10 PM 6 comments:

The SRE and I were expecting the Akatha Kahani girls very early in the morning of the 14th of January. The 13th had been unexpectedly busy, and it was past eleven before I started winding up for the night, putting the house to bed, as it were. The SRE had already got into bed, when I smelled smoke. I checked the kitchen, the gas knobs, toaster etc., and drew a blank. I thought that the smoke could be coming from the central shaft between apartments, perhaps the security guards had lit a fire there. I called the watchman, but they checked, and no, there was no fire lit there. I asked them to send the electrician upstairs (one of two is always on duty in our building), and then called the SRE. By then there was a strong smell of burning and our sitting room, near the main entrance, especially, was full of acrid smoke. I opened all the windows, and the SRE checked the mains, which seemed fine. The electrician also came and opened the board, declared it to be fine, and said that the smell was more of something roasting, perhaps chicken in the first floor guest house. Just to check, he pressed our next door neighbour's bell. It turned out that they were having a havan. It was Lohri, after all!
The next day dawned very early for us- at around three a.m, as the train was reaching Howrah at around four a.m. Jaya had said that they would take a pre-paid cab from the station, but the SRE and I much preferred receiving them ourselves. We did nap later in the day, so that was not a problem.
While washing up the lunch dishes, my trusted help told me that something seemed to be wrong with the kitchen drain- there was a backflow from the main outlet. I wasn't quite sure what was wrong, and decided to ignore it and hope for the best. But by four o'clock, when we were washing up the tea things, I realized that there was a serious problem. Our other guests were expected at five, and it was already a quarter-past four, and the plumber was out buying materials. He finally came and did a quick emergency repair- he even managed to acquire the requisite part, and all was well before the programme commenced.
As the poet Robert Burns famously said:
The best-laid schemes o' mice an' men Gang aft agley.
Truer words were never spoken. We plan to the best of our ability, but so much is out of our hands. Our well-being depends on so many factors, and also on the goodwill of so many.
Truly, there is no place for arrogance in our lives!
Posted by dipali at 11:32 AM No comments:

We drove past a shop sign the other day that said Sur-o-bani Musical Shop.
I was utterly charmed by the very thought of a musical shop.
I could imagine it humming a tune to itself under its downed shutters.
Or dancing a little jig, or just tapping its feet to a really good tune that it happens to hear.....
Posted by dipali at 10:26 AM 34 comments: