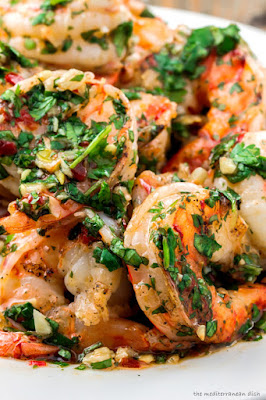 Image courtesy: https://www.themediterraneandish.com/grilled-shrimp-recipe-garlic-cilantro-sauce/
Posted by dipali at 8:05 PM No comments:

The solitary sleeper was not the confirmed bachelor I had thought him(?) to be.
He was smarter than I had imagined, but I think I have triumphed over property-grabbing avians.
In recent days, a pair of pigeons would flutter away whenever I opened the bedroom balcony door.
I wondered vaguely what they were doing there, knowing full well that two pigeons couldn't roost or build a nest on the a/c pipe.
It so happened that my regular house help is away on leave, and the substitute help is somewhat rushed, so the bedroom balcony wasn't being cleaned regularly. While hanging out the laundry to dry one morning, I notice a couple of twigs on the floor, and am inspired to peep under the outdoor a/c unit. To my horror I see a floor full of twigs and leaves and detritus: so this is what the pigeon couple was up to. The next morning the girl is told to clean thoroughly underneath both the outside units 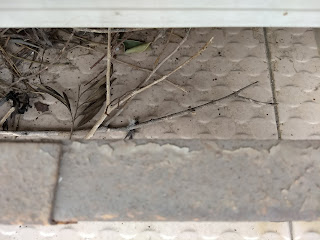 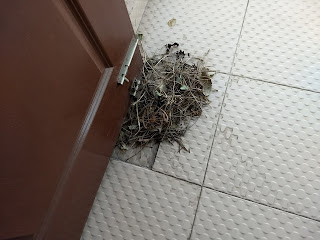 The second picture shows the actual amount of nesting material. Sorry, Mr. And Mrs. Pigeon. If you were sparrows I'd more than welcome you to nest in my balcony, but I have no great fondness for the avian species that is overrunning our cities. Better luck elsewhere.
Posted by dipali at 6:52 PM No comments: