One year ago today was a Sunday.

(This is a leap year, or else today would have been a Monday).

It was the last day our weekly satsang was held at Mr. H's home,
He had retired, and had to vacate his centrally located government accommodation with a sprawling garden, after 10-12 years of hosting our particular satsang.
After we moved back to the NCR, it became our almost weekly meeting place, my sister's and mine.

It was, perhaps, also a way of reliving our childhood and youth, when we often went with our parents to the satsang on Sundays, in a different location, but nonetheless an inextricable part of our Sundays.

Although the RE is not interested in attending our satsang, he usually drives me there, then sits in the car with his newspaper, iPad, book, mobile phone, keeping himself busy for the hour or so that I'm inside. I am truly grateful to him for this. We sometimes venture further afield, sometimes go straight home. ( I sometimes hire a driver for the morning, if the RE's not available).

On this final Sunday, my cousin and his family were visiting us from out of town. They decided to come too, which was wonderful. We'd planned to go to Dilli Haat afterwards, have lunch out, and then go home. My sister was often an insistent host, so we thought we'd visit her if she insisted, or else go on our merry way.

There was a poignancy to that morning's service. It was the end of an era. The new location was miles away, in East Delhi, and many regulars would not be able to go there.

My sister and I would always sit together in chairs in the verandah, as our creaky knees no longer let us sit comfortably on the floor. That was the day I noticed how beautiful and dark her eyelashes were. I even asked her if she'd used kohl, but she said that she never did.

We chatted for a few minutes after the service, and I hugged her and moved towards the car. She seemed a little tired that day, and wasn't her usual insistent self. ( I recall a time I had to go several kilometers out of my way to go and see the spring flowers in her garden. I'm so glad I did).
My cousin and his family spent a few moments chatting with her, and then joined us.

That was the last time I met my sister.

She passed away suddenly less than a month later. We spoke on the phone a few times, even a few hours before she died. It still feels unreal.

Posted by dipali at 6:59 PM No comments:

So many loves throughout this life,

loves both given and loves received
Loves in the past, some long forgotten,
Many gone from this world,
some merely lost to me.
Perhaps more love than I ever deserved
has come my way, truly blessing me.

And then there's this new love
who has overtaken our lives
whose name(s) we chant day in and day out
the spouse and I, crazy Dadi and Dadu
Far away though we may be,
convinced that our thoughts get through
the miles that separate us......

So full of joy today, willing to shout out
to the world, be of good cheer,
may joy abound everywhere,
let the world forget it's myriad woes
just for a day
as we celebrate our little grandchild's
second birthday! 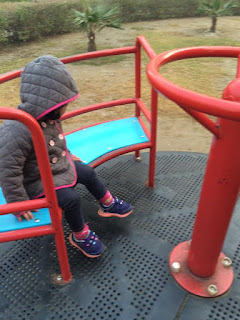