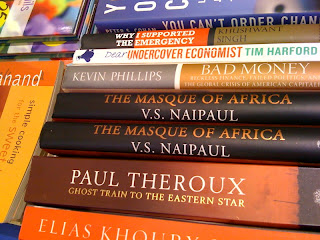 Cheek by jowl at a discount counter in a local bookstore
Posted by dipali at 9:50 PM 3 comments:

Metamorphosis in the age of cellphones

I always thought of myself
As a polite person,
often a pushover,
mostly a wuss.
But now I have changed,
driven to rudeness
by the people who call
on my cellphone at odd hours
asking for,
nay, demanding my attention
whether I wish to listen or not.
They think that I am obliged to listen
to each of their schemes to wheedle
more money out of me,
since I am their 'existing customer'.
I wish I had never enrolled in whatever
investment plan it was
Just so that they would never call me,
and ask me questions that I feel no need to answer.
I tell them that I have no money to invest,
But they refuse to believe me,
And insist on unreeling their spiel until I am rude
to them and then pointedly disconnect.

When they wake me up from a well deserved siesta
(or even an undeserved one-
a siesta is precious, nonetheless)
And expect me to remember all
sixteen digits of the number of
the credit card I rarely use,
I snap, and feel unhappy about it afterwards.
Yes, they are only doing their jobs,
but who has decided that
harassing people over the phone
will actually drum up more business?

I'm a bit nervous of being rude to people
who have legitimate dealings with me
So I'm living on the edge
with this new found rudeness
Don't mess with me.
I won't listen to you unless
I feel the need to.
I know you are only doing your job
But it doesn't give you the freedom
to call me any time you choose.
My phone is mine, and it stays on
for people dear to me,
people whom I know,
people with faces, part of my known world.


Why don't they mail me
if they have anything deserving of my attention?
I can politely ignore e-mails,
or respond to them,
as I chose
without turning into this
nasty person whom I don't like very much.
Posted by dipali at 10:42 PM 8 comments:

The Brilliance of Moi!

Kolkata is going from hot to hotter in the space of the last few days. The son came over last evening, and plonked on his favourite couch, only to discover that the air-conditioner in the drawing room was not working. With great efficiency I called up Samsung Customer Care this morning, and spent several minutes lodging my complaint. When we reached the heart of the matter, i.e. the model of the said air-conditioner, I discovered, to my utter chagrin and embarrassment that the machine in question is an LG product! Ooooops:(
Please tell me that I'm not the only person in the world to have done this!
Posted by dipali at 12:49 PM 30 comments:

Devapriya Roy's first novel is an appealing look at contemporary urban life through the eyes of its female protagonists, one young and one middle-aged, as well as a few vignettes from a male point-of-view. Just this morning I was visiting Parul's blog, in which she is talking about the annoying fashion of naming anything written by a young female author as 'chick-lit'. Devapriya's book most certainly should not be categorized as such.
Mil Chatterjee is twenty-two, and in the opening chapter is searching for the location of the office in which she will appear for her first job interview. She has married her college sweetheart in defiance of all the parents concerned, since he had decided that he wanted to get married 'now or never'. Logic does not work with a young man in that particular frame of mind, and so Mil, in a tremendous leap of faith, marries this young scholar who is working on his PhD at an obscure institute of defence studies. There is great charm in Devapriya's writing about the life of a young couple in Delhi, who are not really of the city and yet are learning to live there, Mil with her non-existent sense of direction, and Abhi with his reliance on Google maps! Both of them are too proud to take any financial help from their parents, and Abhi's fellowship cheques always reach him late in the month. The nosy landlord and his family, the maid (who sounds most inefficient), and the trials and tribulations of housekeeping by youngsters who have little or no idea of home or finance management are fun to read about.
Mil's youth and dreaminess are central to her classification as a vague woman. Despite being married to the love of her life, she is deeply unhappy at being estranged from her parents because of this. Although her mother still speaks to her occasionally, the conversations normally end up with tears or shouting or both. Her father, whose pet she has obviously been, doesn't communicate with her at all. The disapproval of Abhi's parents, particularly his mother, also adds to her angst. Abhi soldiers on, trying to deal with his responsibilities as a married man, not quite appreciating how his decision to turn down a full scholarship to a prestigious American university has suddenly reduced his worth in the eyes of the world, his parents and Mil's parents. What is beautifully conveyed is both his awareness of and acceptance of Mil's fragility in this brave new world they find themselves in. His impatience can make him take strange decisions, sometimes, like the time he and Mil go furniture shopping!
Despite being an hour late for her job interview, Mil actually does land the job, on contract, and is befriended by her colleague, Indira Sen, a widow in her early fifties, who lives in a rambling house with her college going daughter, water and washing obsessed mother-in-law, paternal uncle and her extremely dominating mother. Indira is not at all in control of her life- she is mild mannered and finds it hard to stand up to anyone, especially her mother, and has landed herself in a terrible mess- she owes several banks huge sums of money on various credit cards and loans, and despite paying off minimum amounts due every month, finds her debts increasing exponentially. The situation is so bad that collection agents have started visiting her house and frightening her mother. Indira and Mil are enjoying tea and chocolate cake together in Indira's office, when her mother calls and launches into a powerful tirade against her daughter's spending habits and the dire consequences the entire family is facing because of these. Mil cannot help overhearing her friend's side of the conversation- Indira's vulnerability somehow catalyses a far warmer friendship than would otherwise be likely. Despite her general fragility and vagueness in dealing with her own issues, Mil helps Indira face up to her credit card problems and gets her started on solving them. The fact that they are both foodies also helps cement their friendship!
Each character rings true, although Indira's mild-mannered mother-in-law, Ashamayee rarely figures in the story and is really a vague sort of character, poles apart from the stock mother-in-law figure. As a grown woman who has to move back to her parents' house when her husband dies, Indira's loss of autonomy is tangible. She finds joy in being out of the house as much as she can, and her office is a home away from home for her. She overeats, loves to read, is a messy housekeeper, and is a warm and empathetic friend.
Abhi is a passionate follower of a website called the Desh Defense Forum, and his real and virtual battles with members of this forum often occupy his thoughts. And yet, his observations on the nature of married life are often poignant:
Happiness had come and gone and come again over the next few weeks, in moody fits and starts. Extreme joy was followed, Abhi had noted, by the tiredness of new beginnings, of building from scratch, of worries that never seemed to cease. There were the cheques that never came on time from the institute. There were the parents - all four of them - who silently strolled the house with unhappy footsteps. There was all the growing up, all the responsibility that sometimes became an invisible monster in the room, taking up all the oxygen and eating all the food. But sometimes everything would be as light and airy as bubbles in the air.

Of course Abhi and Mil are of great interest to their neighbours.
The first time Abhi and Mil had fought satisfactorily, that is, accompanied by a banging of chairs and a banshee-like wail, everyone in the neighbourhood had been rather relieved that these two bookish types also fought like cats and dogs............. It happily confirmed their opinion that the romance- manifested in cheek-to-cheek dancing in candlelight during load shedding, the shadows hugging the peeling white walls of the house, the reports of rabid discussions over a book as reported by the maid,................ the romance was rapidly deteriorating into spousehood.

In essence, though, the book left me with the conviction that however old or grown up or mature we may think ourselves to be, the need for parental approval and love always remains. There are no villains here- Mil's and Abhi's parents, and even Indira's overpowering mother, Charu, all have their child's best interests at heart. There is much working out of karma for each of them before resolution is attained.
A delightful portrayal of contemporary urban life, evoking much thought on the nature of our core relationships. 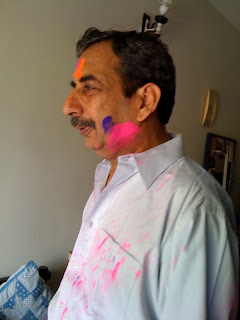 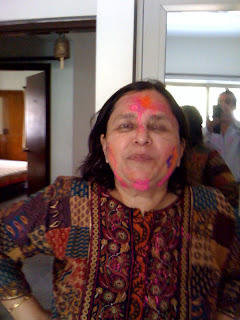 Seven neighbours got together for a tiny Holi celebration in the building garden. Many residents were away, the children were all celebrating elsewhere. But one lady took the initiative, called all the available residents and arranged for thandai and gujiya. Which made it a colourful little Holi for us. Thank you, K, for turning just another Sunday into a festival!
Posted by dipali at 1:18 PM 10 comments:

The Uncertainty of Everyday Life

A calamity of any kind underlines how tenuous our lives really are. Yes, we still hope and plan for the future- not to do so would be foolish. At the same time, one needs to accept that our so-called 'normal' lives are fragile indeed, something to be grateful for, however mundane they may seem.
On hearing of the terrible earthquake and tsunami that hit Japan today, a verse from Sant Kabir kept coming to my mind, again and again:

Roughly translated:
Take God's name with every breath you take,
Do not waste a single one
Who knows whether that breath
Will be your last or not....

Of course it is not practical or possible or even sensible to not focus on one's work or studies or even leisure activities, and pray all through the day. But surely, in the dailiness of our lives, there are routine activities that can be done with our minds focused on the One above, who holds each second of our lives in His hands. Let us not take our lives for granted, or rather, let us strike the necessary balance between taking them for granted and simultaneously accepting the fact that each day could be one's last. A tricky balancing act indeed. 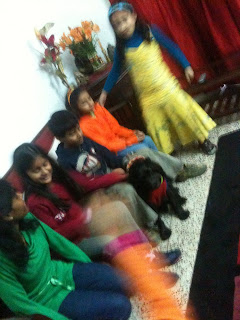 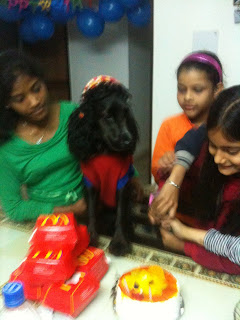 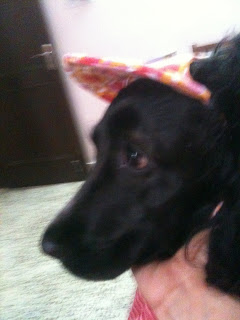 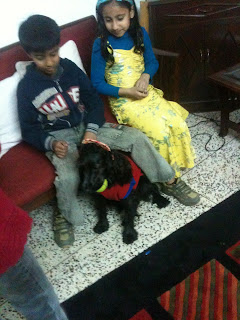 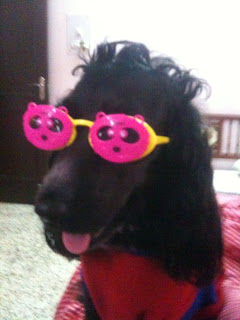 Our darling Mahi, the youngest of our grand-dogs, celebrating her first birthday with her friends.
Wish we'd been there!
Posted by dipali at 11:03 AM 16 comments: