A Conspiracy of Silence

Mornings in our house mean music, especially at the time that I'm making breakfast and the SRE's packed lunch. In the good old days when Worldspace existed, our radio was perched on the sideboard in the dining room, just next to the kitchen door, and beautiful music would float through the house....... Mourning isn't bringing WS back, though, so cassettes (yes, they still exist) and CDs need to be played.
(I'm not sure how or why, but the music systems in our house are all male, hence will be referred to as such).
Boseji has been temperamental for years, so when the younger son wanted to take him to college for his last term there, we agreed with alacrity, though we didn't know how well or otherwise he would play there. The younger son duly returned Boseji to us before setting off on new journeys, and we found that all it would play was FM channels. So little Mr. Philips remained our system of choice, being more reliable than the others, and small enough to cart around the house.
The Pioneer home theatre in the living room had been for repairs, and the repairman said that he would not be able to repair it subsequently- parts were getting too difficult to find. Also, it would no longer play VCDs or DVDs, only audio CDs.  Mr. Pioneer took a leaf out of Boseji's book, and became very very selective about the CDs he was willing to play. Very often the CD you lovingly selected and put into the system would not load, and you'd get a sign on the display saying NO DISC, which was rather annoying. The younger son had previously connected the Pioneer to the DVD player, but when we changed our dabba TV for a flatscreen a.k.a. The Blackboard , the DVD player was  connected to the TV, so playing audio CDs on it was no longer an option. Since the computer could be used to play music in our bedroom, we thought we'd install the little Phillips in the sitting room.

That's when the fun began.

Mr. Philips has played happily across the house, from the kitchen to the dining room to the bedrooms.
He even played at the location of our new plug point. Since I didn't want him on that particular table, I put a small stool next to the Pioneer table, and tried connecting the system there. It would just not play. It was hot. I turned on the air conditioner, and the lights near the plug points. I changed various adaptors. I was sweating from every pore, and really annoyed by the whole business. I had other things to do that morning, so I finally gave up, and resolved to return later with a spike buster, in which the sockets are normally good and tight. Mr. Philips was out to get me that day, though, because he acted up for ages even with the spike buster, simply refusing to connect. I was seriously miffed with the whole situation, but finally managed to connect the wretched machine. Now, unfortunately, Mr. Philips doesn't have an outlet from which I could play him through the Pioneer amplifier. Although he sounds pretty good in small spaces, especially the kitchen, he really doesn't have a voice powerful enough for our sitting room, which is fairly large. The SRE and I thought of finally getting a new system, when Boseji caught our attention. Since he wasn't playing any CDs whatsoever, it made sense to take him to the service centre. Some ten days after leaving him there, I receive a call from the service centre, telling me that a certain (large) sum of money is required, as a significant part needs to be replaced. The SRE agrees that it has to be done, and so, that afternoon, I go and collect a brilliant and beautiful Boseji.

When the SRE comes home that evening, we decide to put Boseji on the sideboard, in the hallowed space that had been occupied by our beloved Worldspace radio. We remove the Croma, the digital photo frame our kids and given us, and put it back on the corner table in the sitting room. Boseji's plug and the plugpoint have the usual conflict, which involves shifting the (heavy) sideboard back and forth a few times. Finally, though, we have rich and glorious sound!!!!!! Long may it last. 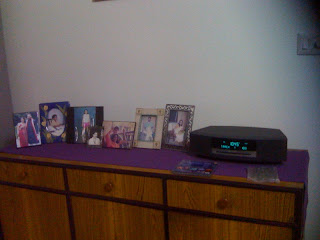 The SRE has enhanced Boseji's status still further by saying that he's playing 'with' our children!

Oh, I am glad Boseji is all right after some surgery. It's always fun reading about his antics. Though probably he will behave well now.

@Banno:I sure hope he does!!!! I spent a goodly sum on his surgery. The trouble is the insidious Kolkata grime that seeps into everything, and is most unkind to electronic gadgetry:(

hahahah! you and SRE are super cute :) Glad to hear Bose-ji is better now

this is unrelated to your post, but i stumbled upon your blog. Noticed you supported CSA awareness for three years. I felt the need to reach out.

My name is Shruti Gupta and i am a student of design at Srishti School Of Art, Design & Technology in Bangalore. Currently busy with my diploma (final dissertation) project. The project is aimed at "protection of children from child sexual abuse".


After preliminary research i have found that not all Indian parents are aware of how to empower and safeguard their children. As part of my research, i have constructed a questionnaire i would like for you to fill out.

Your responses will help me validate my enquiry. And i could end up designing any of the following:


A manual for parents who want to talk to their child about body safety rules.

A storybook that a parent reads to their child.

It could even be material that talks to parents on why it is important to talk about this issue. (as there is such a strong social stigma attached to this topic)


Here is the link to the questionnaire - https://docs.google.com/forms/d/19p2-aUrzE16XOO-Drgllhj60kco0Xwr-AqUE5scPNU4/viewform

(this questionnaire is anonymous, and you do not have to fill your name)


Do spend a few minutes of your time and let's work together in safeguarding and empowering our children to become stronger individuals.

@ami kay? : Thank you for commenting here. I have filled in your questionnaire, and wish you all the best for your very valuable enterprise!