What are your deepest fears? Can you even comprehend why you have them? One of my most long standing fears is the fear of being displaced, whether by a man-made calamity such as a war, or by natural disasters such as earthquakes, volcanoes, and floods! During the India-China war of '62, I was very young, and we were living abroad, but I do remember much parental glumness at the time. The 1965 and 1971 wars with Pakistan were a lived reality: living in Delhi meant that you were vulnerable. There were trenches dug in the common gardens of our colony, and all our windows were darkened with black paper. My father worked in the Chief of Army Staff's secretariat, so he certainly knew more than he ever let on. We lived in Lodi Colony, our flat overlooking Meher Chand Market, which was a very local, downmarket kind of market back then, not the swish place it has become in this millenium. The war of 1971 had just been declared on the radio, my father had not yet returned from office, and some moronic shopkeeper had lit a bonfire on the roof of his shop. It was early December, and cold, especially since the market backed onto part of the Ridge, a forested area where the calls of the jackals would terrify me. (This area was later absorbed by the Jawaharlal Nehru Stadium).  My intrepid mother, all five feet of her, marched down to the shops and made sure that the fire was immediately put out, and that we were not likely to be bombarded that night due to sheer carelessness!

My knowledge of Delhi's geography was largely formed by bus rides and by the buses themselves!   The destination boards held names of places which sounded exotic until they became familiar. Naraina, Najafgarh, Safdarjang, Madras Hotel, R.K. Puram, Janakpuri... As the city grew, the range and extent of bus destinations grew too. I remember asking my father where EPDP Colony was. It sounded rhythmic, euphonious even. We knew about Partition, although our U.P. origin family did not suffer directly because of it. The Punjab part of the story of Partition was far more familiar to us Delhi folk. EPDP stood for East Pakistan Displaced Persons, a legacy of the peculiar creation of a country with two distinct wings, separated by another country. This colony was formed in the early sixties, and renamed Chittaranjan Park in the eighties.

Living in different parts of the country has been enriching! My recent years in Kolkata introduced me to the culinary, and other rivalry between the Bangal and the Ghoti. I discovered that many of my friends had ancestors from across the River Padma. Bengalis were not the homogenous mass I thought they were when I was in school! (Quite incidentally, I went to a school with a large Bengali population.) A brief visit to Bangladesh in 2011 was also a revelation. Our visit to Sheikh Mujib Ur Rehman's house was heartbreaking, the site of a massacre, where the blood stained stair case speaks of the horrors of the violence unleashed upon an entire family. The countryside was exquisitely beautiful, as were the exquisite weaves and handicrafts, yet the history of this young country has been a painful one. Let me ask you here to travel back in time, when Bangladesh was not even a dream, to a time when East Bengal was made into East Pakistan, and a vast number of people came to West Bengal as refugees. 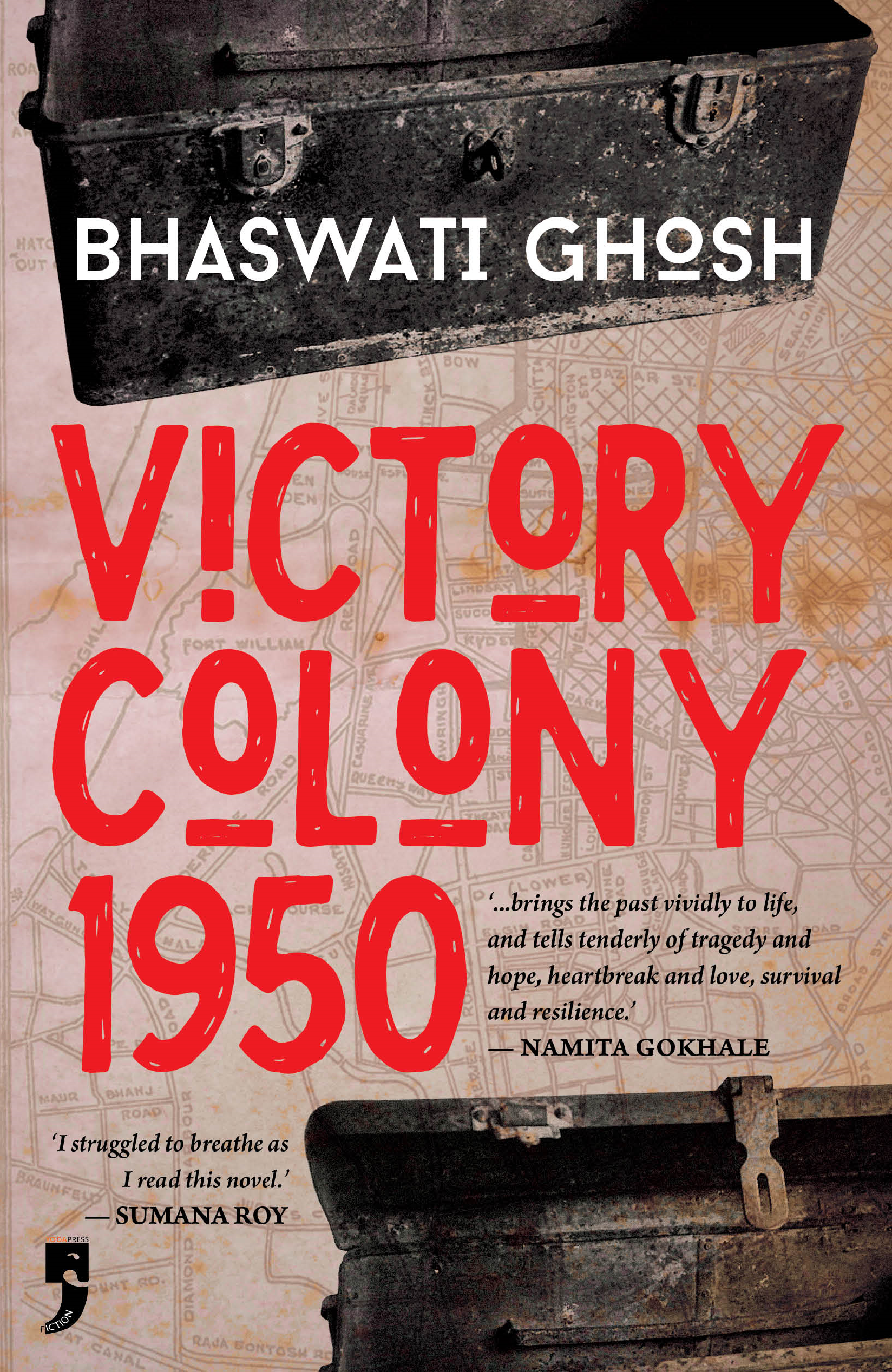 Bhaswati Ghosh writes about this period in her book, Victory Colony 1950. Amala and Kartik, the children of fisher folk, have lost their parents in a fishing accident, soon after which the horrors of Partition are unleashed. Their Muslim neighbours shelter them until such time as they can be helped to catch a train to Kolkata. The two youngsters get off the train at Sealdah station, an overwhelming, immensely crowded, stinking, noisy place, a huge contrast for those coming from the quiet, coastal countryside. Amala goes to look for some food for her younger brother, Kartik, who is faint with hunger. She comes back empty handed to find her cloth bundle where she had left it, but her brother has vanished. She is devastated. Manas Dutta and his group of friends are college students who are working as volunteers to help settle the refugees. When the howling Amala is threatened by the police, Manas insists on taking her, and other refugees from the station, to the Gariahata Refugee Relief Centre. He has all the necessary approvals. Innoculations are administered and formalities completed before they can leave for the camp.

Life in a refugee camp is by no means easy. Amala is housed with an elderly couple, who become her surrogate family. She is tormented by the absence of her brother, but dares not share her story with others. Going back to Sealdah Station to look for him is her secret goal.

Bhaswati's detailed descriptions make each scene come alive. You can see the old barracks and the tents that make up the camp, and taste the watery gruel that is the only food on offer. You feel the acute pain of those whose lives have been overthrown by a turbulence not of their making. When Manas tries to find out about her life in her village home, Amala snaps "What village, ha ? Do I have any village, Babu? What stories do you want to hear? Why? To see if my mouth bleeds when I tell them? Or so you can feel happy it's not your story?"

Over time, Amala and the other refugees do settle into a routine, where they are assigned certain duties in the camp. There are characters that claw at your heart with their pain, survivors of unspeakable violence that has robbed them of their sanity.

Manas comes from a well to do family, and lives with his widowed mother, grandfather, and a loyal staff . His mother is not very happy about his social service activities, especially as she is steeped in tradition and doesn't care for her son mingling with lower castes. A sensitive young man, Manas is often struck by the contrast between his own life and the lives of those in the refugee camps. His diary entries reveal his sensitivity: So many people have been left without anywhere to go. God knows how many more are to come. All of them had a home, a patch of land, cows and hens to call their own. Now all they possess are small bundles of clothes and a few utensils if they are lucky. oh and the flesh and bones on their bodies. That's about it, for they have even lost the dignity of being a human. I don't understand why this was necessary to gain freedom. I won't be with them forever, but misfortune will not leave them anytime soon- that I am certain of.

After a while, the government grants start drying up and food rations dwindle. Malnutrition is rampant, and yet, 'despite such bickering over the belly's fire, it amazed Manas to see how admirably civil the camp atmosphere remained.' Also, 'The very fact that these men and women didn't look beyond what each day brought helped them survive what was essentially an unlivable life.'

There is a great need for economic activity to help sustain the refugees. One step is the setting up of sewing classes. Manik, one of the volunteers, has a widowed aunt (his mother's cousin) who is willing to teach the women in the camp. Bhaswati paints a vivid picture of Manas's first meeting with her. 'It also seemed to him as if he could talk to Chitra about anything, ask her any question without offending her...Manas realised how different it was from when he was with his mother. There, he struggled to find common ground for a two-way conversation. He rarely shared the things he was most passionate about with her; she just wouldn't get it, wrapped as she was in her cosy world of gods, gold, saris and neighbourhood gossip.'

After several months in the camp, with its diminishing government support and inconveniences, the younger members of the camp realize that there is no going back, and they will have to make a life for themselves in this new country. With the help of a local Left Front leader, they had set up a new colony by occupying a large tract of unused land some twenty kilometers away, near Shibpur. The land reportedly belonged to a local zamindar. Of course they are attacked by the zamindar's men and clashes between the groups continue for several days. The state government intervenes and settles the matter by promising monetary compensation to the zamindar. Thus Victory Colony is born.

Rich in it's details, Victory Colony 1950 is a book that needs to be read and re-read. It is, ultimately, a book about the triumph of the human spirit, of love, adventure, commitment to ideals, about individuals who make a difference. Bhaswati's writing is often poetic, always elegant in its simplicity. Do read this beautiful book.