Book Review: What We Know About Her

I first heard of (and heard)  Krupa Ge at an online event featuring Nisha Susan's delightful book, The Women Who Forgot to Invent Facebook and Other Stories. That was when I learned that she had written a book about the devastating floods that almost drowned Chennai in 2015, Rivers Remember: the Shocking Truth of A Manmade Flood, a book that I promptly ordered and read. Chennai is one of my cities, a city I know a little, and love. A friend's family had been through harrowing times during this disaster, and this book gave a very well written, personal and also deeply analytical, view of this crisis.

A few days ago, while browsing on Amazon, I came across What We Know About Her, by Krupa Ge. The blurb was appealing, and the book was soon on my Kindle. I am so very glad that I bought this brilliant book.

The narrator, Yamuna, is a young woman trying to make sense of her life, of her family history, of her doctoral studies, of her relationships. She visits Benares to spend time with her grandfather, Kannaiya, one of the most appealing and unusual characters I have ever come across. After the death of his beloved wife Subbu, several years ago, he eschews his erstwhile atheism because "I have to hope that it doesn't end here. How can it be that your grandmother and I are done?......I chose to believe that even though I can no longer see her, I can feel her. I can have conversations with her. The dead and the deities play the same role in the lives of the living. They are who we must turn to with life's questions."  Although he does not comment upon it, he is not happy with Yamuna's live-in relationship, but is perceptive enough to know that she is emotionally disturbed.

The narrator intersperses beautifully two story arcs, one in the early 1940's, where much of the narration is in the form of long and beautifully detailed letters that her grandmother, Subbu, writes to her beloved husband, Kannaiya. There is affection, friendship, and tenderness in their relationship. Yamuna is fascinated by her late grandaunt Lalitha, who was a renowned singer, and whose life and death both seem rather mysterious. Her mother tells her," When we hear stories of a nine-year-old married, or thirteen-year- old made in-charge of a household, we think of them a certain way. Like my grandmother and Lalithamma. I knew both women. It's not all 'oh poor dear' you know? They were more than there marriages. They had this ability to build worlds of their own. Limited-entry, invite-only worlds. Where they did as they pleased..........All the while aware of the fact that it was all brief; an incandescence. That it all had to be quickly dismantled and hidden away from those who sought to bind them.........Even in a deeply skewed world,this was possible then, it is possible now."

Some of the old stories are truly horrifying, the ways in which young girls are castigated by their own mothers and aunts. And yet, some of them manage to go beyond this punitive childhood training. It's a truly scathing account of women who become the handmaidens of patriarchy.

The evacuation of Madras, intimately known as Patnam, during the second world war, materially affects the protagonist's family. Lalitha's description of the ghost town the city has become is chilling indeed. Her account of the vibrant world of music and cinema which Kannaiya introduces her to seem very real and are most appealing.

The present day arc is equally compelling. Yamuna's confusions, her grandfather's brilliant, gentle intervention in her life, her conflicted relationship with her mother, her depiction of modern day social life, social strata, the expectations within relationships that have the potential to destroy them, and so much more, all interwoven with past events, form a beautifully detailed tapestry with fascinating characters. The house in Chengalapattu is a character in its own right. The cities of Benares and Chennai come brilliantly alive. There is so much going on, with love, both filial and romantic, and forgiveness, playing a stellar role. It is an accurate portrayal of contemporary life with its own complexities....

This is a book to read and savour again and again. 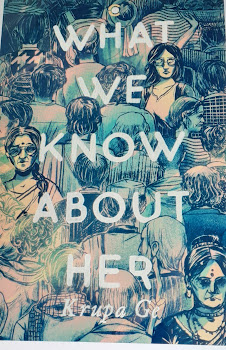 Thank you for your lovely, generous reading of the book. :)

I am thankful to you for writing this beauty, Krupa!