Book Review: Hyderabad: The Second Book of the Partition Trilogy

Manreet Sodhi Someshwar is an author whose books speak about the human condition in immensely informative and enriching ways, and one whose works I value greatly.

I was greatly affected by her first book in this Trilogy, Lahore. Her interweaving of the lives of ordinary people, with the lives of the leaders and politicians of the time, was masterful. The character of Sardar Patel stood out for me, as I realised I knew so little about this stalwart, as well as the support he received from his daughter, Manibehn. Even the Mountbattens' dog found a mention, as did their daughter, Pamela. Somehow, though, the horrors of that painful time in our country's history converged, in my mind, with our present state of  simmering communal tension, inducing intense despair, which kept me from writing about that brilliant book. 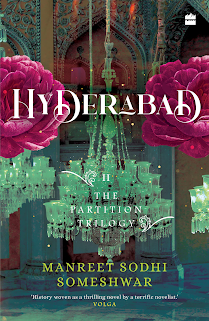 Hyderabad deals with a history that I knew very little about. It is an immensely readable account of the difficulties in getting the last Nizam of Hyderabad, Mir Osman Ali Khan, Asaf Jah VII, to join the newly independent Indian nation. It is a fascinating, and yet again, painful time in our history, with communal riots breaking out, 'death trains' crossing the borders between India and Pakistan, the assassination of Mahatma Gandhi, and Jinnah's attempts to woo the Nizam, who was an extremely strange character in his own right. Dirty, smelly, a heavy smoker, yet astute enough to run rings around his legal adviser, Walter Monckton, the Indian government as well as the Governor General, Louis Mountbatten, the Nizam comes across as an extremely intriguing character, totally convinced of his own, and his kingdom's, invincibility. And yet, his daughter-in-law, the Princess Niloufer, speaks highly of his kindness to her. Her lady in waiting, Uzma, gets caught up in the political intrigues of the time, as do Jaabili, and Daniyal Khan, who runs a printing press.The narrative is richly textured, and one learns about many of the social systems prevalent in Hyderabad at the time, many of which were patently unfair, if not actually cruel. There are many characters and many adventures, all interwoven skillfully, to create a richly woven masterpiece.