The Confusion of Being Us 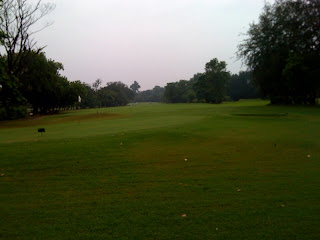 The golf course at the Tollygunge Club

The SRE and I have dovetailed certain idiosyncracies into a strange pattern that usually suits both of us, but sometimes has innocent bystanders wondering at our sanity. This morning was a case in point. The specific idiosyncracies relevant to this morning's fun are as follows:
1. The SRE hates carrying a house key if he can possibly help it.
2. I'm paranoid about taking my personal house key out of whichever handbag I'm using at the time, so if, at any time, I step out of the house without my handbag, as, for example, when I go for a morning walk, I take the 'spare' key.
3. I do not take my mobile phone out for a morning walk.

I left for my walk at five thirty a.m., not quite sure whether or not the SRE would go to play golf or not, although he had planned to. When I got home, the car was still there, so I asked the car cleaner to come up and take the car key. The car key wasn't in its usual place, so I went into our room to check. There was no sign of either the car key or the SRE. (Yes, I even knocked on the bathroom door). His wallet, however, was lying on the dressing table, which was odd, because he needs to carry it to pay his caddy. (Besides the minor fact of his driving licence also being ensconced within it). I was rather puzzled, then looked to see if his golf clubs were in the house or not. They weren't, so I tried calling him on his mobile phone. I kept getting his caller tune, but no SRE.
Picking up the spare key, his wallet and my phone, I went downstairs to look for him. The car was still there, and the car cleaner said that he was walking around the building. The watchman told me he was in the lane outside our building, and there he was, trying to call me on my mobile phone.

The poor man was most relieved to see me. He had come down at six a.m. and realised that he had left his wallet in the house. He started heading out on the route I regularly follow, but then realised that Nature seemed to be calling, so he thought it prudent to walk around our building.
Unfortunately, if you walk in a more or less circular path around a building, there is a great chance of missing someone walking in through the single pedestrian gate, especially if that person doesn't know that he or she is being looked for. It would have been simple enough for him to tell the watchman on duty to tell me that he was walking around the compound and waiting for me. I think he had too much on his mind to think of such simple solutions, poor man. After several rounds he probably thought that he was more likely to find me in the lane. Also, he wasn't answering my calls, as his phone had been 'silent' since the important meeting he'd been attending all of yesterday. An unanswered ringing mobile phone is something I find truly nerve-wracking.

I think we were both quite overjoyed to finally find each other. He did go and play golf, with his wallet! I am seriously thinking that both of us need to change a habit or two, to prevent such chaos from happening again. Knowing us, though, we may well find some other way of totally confusing ourselves.
Posted by dipali at 7:48 PM

This post made me smile. Don't we all have our little routines that are counter productive to the person we live with? :)

This was funny! But I can imagine the distress he must have been in. :)

you guys are just so cute! BTW, we both have same habits!

LOL!! I can so picture something like this happening at my place! :D

you almost got me nervous there for a minute. glad it ended well. you're so cute

Uff you two! I can understand you not wanting to carry the cell but consider carrying it muted. I worry when my folks are cell-less.

i love dipali-SRE stories.. such a fine romance!

@everyone: Thank you for enjoying our confusions!
@Sue: It's the carrying of the phone that is a pain! I'd have to take it out of its case, and most of my walking pants don't have pockets- I have my little face towel in one hand, key scrunched up in the other.Where to carry phone?

The 2 of you make for a mighty cute pair. and sigh. this kind of incident would lead to a flaring argument over who was at fault in OUR case!! :-)

@Just Like That: I guess we have mellowed down with age! I sincerely hope that all our screaming matches are well in the past.