To my mother, on Teachers' Day 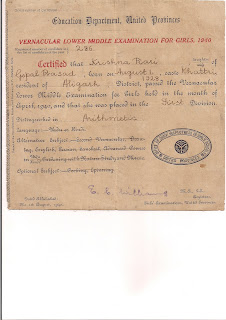 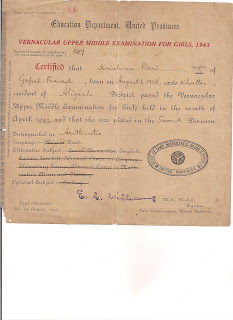 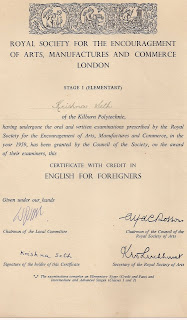 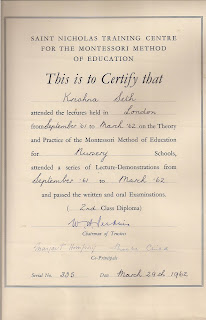 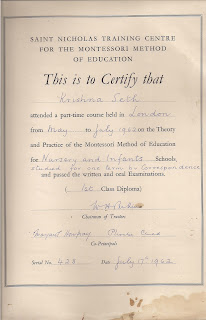 My oldest child calls up on Sunday morning with a huge smile in her voice.
She is returning from a two and a half hour breakfast meeting with Ma'am, who was in Delhi for a short while.
I'm smiling too, inside my heart.

I am proud to be a part of this wonderful lineage of teachers, even if it's been years since I taught a class.

I recently came upon my mother's old school certificates. She had completed what was known as the Vernacular Lower Middle in 1940, and the Upper Middle in 1943, growing up in a small town in U.P. By the time she passed her upper middle school exams, at the age of fifteen, she was already married, taking care of an ailing mother-in-law, who did not survive for long.
Her firstborn, my brother, was born when she was a little over sixteen years old.
My sister was born when she was twenty five, I when she was twenty seven.
My parents spent their early married life in fairly turbulent times. They were staunch nationalists, and would go and hear Gandhiji speak when they could. My father managed to study as well as work in a government office, and had graduated in 1953, thirteen years after he had passed his high school exams.
In 1957 my father was selected for a posting in England. He sought his father's permission to leave the country, and was told that he was free to go anywhere in the world as long as he could take his family with him.

My earliest memories are of our house in Teignmouth Road, of my mother helping us make clothes for our toys, particularly for our golliwog. And satin drawstring purses from remnants. I remember being utterly fascinated to see how turning a raw-edged piece of sewing inside out gave it a smooth finish.
In 1959, my mother attended English language classes. We remember her textbook, Essential English. I also remember not feeling happy the evenings she wasn't at home. Her fondness for learning didn't abate- she did baking courses (despite never eating cakes or eggs) and lampshade making courses. In the early sixties she did her Montessori training, and my sister and I were absolutely fascinated by her neat 'homework', files and boxes of flashcards. We used to love going to her school when we could. She would ensure that we learned Hindi from her, against our inevitable return to India, despite our protests. There is a whole lifetime of memories associated with her, far too many to write down here..........
There is so much I have learned from her, despite the inevitable differences which often cropped up between us as I grew up. But, as a young child, I could not have wished for a better teacher.
Posted by dipali at 5:27 PM

So cool, Dipali! Your mom must have been a source of inspiration. How enterprising she seems for the times she lived in.

Your mother must have been a wonderful teacher. Thanks for sharing this.

- "I remember being utterly fascinated to see how turning a raw-edged piece of sewing inside out gave it a smooth finish." :)
- Lovely post....mothers inspire don't they...I can barely live up to being the mother my mother is...:D

Our earliest teachers are our parents for sure.Your mother was truly a great one and of course to have a teacher like ma'am is like being blessed!

such a special teacher!

Wow that's awesome Dipali ..to have done all that she did in that time and age. This is inspiring even today. Wonderful to catch a glimpse of your past ..thanks for sharing.

A very touching, meaningful post that I read not once but twice. Your mom seems like a wonderful person and how lucky you have some one so inspiring to remember at all times.

What a lovely post. I think mothers of that generation did a lot selflessly.

I was lucky enough to be taught by my father in School!

Do let me know your feedback.. Would love that

How thoughtful of you to keep her certificates...goes to show how proud you are of your mom.

@A Muser: I think we took her very much for granted as children! It is only now that I marvel at her courage and her spirit.
@ Banno: She was extremely patient with young children.
@Gayatri: I'm sure our children will look up to us for reasons which we will find unfathomable:)
@Yasmeen: Yes, we've been very fortunate in having Ma'am in our lives. Also, besides giving us Life itself, our parents certainly do lay the foundations of our lives.
@anonymous:Yes indeed!
@choxbox: Thank you!
@Neera: Yes, that was a world so very different from our globalized world!
@mim: Thank you.
@R'sMom: Thanks. I loved your post- I have a huge backlog to catch up with.
@Sanand: Thank you!
@radha: Although she was never a working woman, my mother managed to exude a very professional kind of persona! People often thought that she worked outside of the home.
@prachi: I loved your post. I need to post a comment there. What a wonderful teacher your father is!
@sukanya: My sister was clearing out a lot of stuff at our parents' house. She showed me several old files with all kinds of memorabilia, which I happily carted home to Kolkata! I will definitely preserve them now.

thanks for sharing Dipali...im proud/blessed to have this tenous link with you lineage or no lineage lol

This is a lovely post. It fits is no wonderfully with my memories of her cheerful smile and her pretty saris.

@Nat: Same here. Big hug, you:)
@Sue: Thanks. I remember her being utterly charmed by the wee Bhablet:)