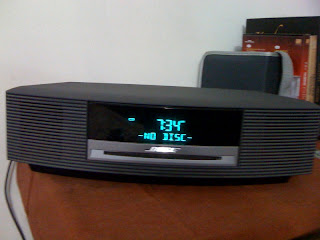 The SRE and Boseji have, between them, made a monkey out of me.
We had attended a programme of Sufi music in early December, and had picked up a couple of CDs from there. One was a beautiful collection of Kabir bhajans sung by Shaunak Abhisheki, and the other a fusion of Indian bamboo flute and Spanish guitar. The SRE tried playing the fusion CD in Boseji, but Boseji didn't want to play it. I was busy doing something (presumably useful) elsewhere in the house, so I'm not quite aware of the complete sequence of the interaction between the man and the machine. What I was told by the SRE was that the CD was stuck inside Boseji and was not emerging from his maw. I pressed the eject button on the remote a few times, switched the plug point switch on and off a few times, and gave up. Since my dear sister-in-law and her husband were visiting us the very next day, Boseji was wrapped up in an old tablecloth and put away in a suitcase till further notice.
It was only today that I remembered Boseji and the stuck CD. I extricated him from the wrappings, connected Boseji to a plug point, fiddled with the remote. 'No Disc' was what the machine said, but I didn't trust Boseji's pronouncements, so I carted him off to the service centre, complaining of a stuck disc. The service guy called me into the examination room, played a random CD on the system and told me that neither was there a CD inside of Boseji, nor was there any other problem. That was great news, but where on earth was the CD??? Had it dematerialised somewhere? The younger son just got home yesterday from his travels, and was telling me of his future plans for Boseji, for when the parents were sick and tired of him- he wouldn't use the CD player at all, but would connect Boseji's terrific speakers to other music sources. Maybe Boseji was terrified at the thought, and had obliterated the CD into non-existence.
The SRE was called, was pleased to know that Boseji was well, but started worrying about the disappearance of the missing CD. By then I was quite sure that the SRE had absent-mindedly put the CD in some other cover and completely forgotten about doing so. Imagine my chagrin when I finally get home and find the missing CD inside its very own cover!!!!!!!
I am now playing it on the little Philips player, so at the very least I can hear it before I reinstate the temperamental Mr.Bose, who may or may not chose to play this particular record!
Posted by dipali at 6:21 PM

Reminds me of IS taking pictures of my neice's 1st birthday without a film roll in the camera!!!(Ya ,this was when we didn't have digital)

LOL LOL LOL!! This can so happen at my place :) The husband and I specialize in our own ways, but manage many such blog-worthy episodes :)

hahahahah! he is so so cute...reminds me so much of my dad..we had this with a cassette once..ma searched and searched and finally it was inside the actual cover... :) Gosh he is a sweetheart :)

By now, you ought to know SRE and Bose-ji together mean trouble. :)