Footling business and the mating season

I've been away from home for a while now, as I have had  surgery on my right foot, minor corrective surgery which entails what feels like the very long recovery period of three weeks. I am staying with my older daughter, and the SRE is actually managing on his own, with some help from the younger son on weekends, the part time help who makes his dinner when he is in town, and my neighbour, who has the most important role of guarding my spare house key with her life, as well as opening the house for the maid when she comes to work in the morning.

I am doing well,  hobbling around now, going for slow walks in the colony premises, and being thoroughly pampered. 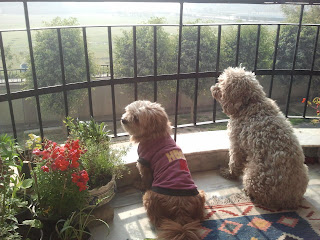 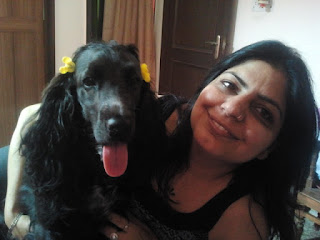 I also have  cuddlesome canine bedfellows, as I like to have the air-conditioner on at night ( my daughter and son-in-law are not using theirs these days) and it is the dogs'  birthright to sleep in whichever room the a/c is running. You cannot, however, close the door, as both the boys like to check on their owners whenever they feel like. This used to mean a wide-open door and inefficient cooling. A strategy has, however, been devised, in which the curtain is drawn across the doorway, so the door can't open very far. I am now the official a/c person in the house- even if I'm outside in the drawing room, I am barked at so that I may go and switch it on. I don't comply, of course, most of the time.

What has been very very educational is the love life of the family dogs! The black beauty is in heat. Her first lot of puppies are now a year old. When she came visiting last weekend, we had a tough time keeping her away from the resident males, as there were plans afoot to mate her with a friend's dog. The friend and her dog both proving unavailable, this week was a different kind of circus. Both the apso and the spaniel had spent a very frustrated week, during which the little apso kept trying to mount the male spaniel, and kept getting yelled at for this unseemly behaviour.

As soon as the female came home this weekend, we had the equivalent of a canine orgy. Finally, of course, the male and the female spaniels mated to their satisfaction, leaving out a very unhappy little apso. We have been wondering what strange puppies would emerge if such a union happened to take place. It is, however, extremely unlikely, as she is so much taller than he is. Our little chap has not conceded defeat yet, though. He  keeps jumping on her head, trying to get her to sit down, and of course she doesn't oblige. Each time he tries mounting her from the rear, she just shakes him off, and the poor little chap tumbles down, only to try, try again. The male spaniel, of course, watches smugly from the sidelines. He has been wearing a very satisfied grin since yesterday afternoon. My younger daughter has been scouring websites, looking for a suitable match for the poor little chap, but has not yet found one. Apparently dogs come into heat once in six to eight months, and have a gestation period of  a little over two months. Let us see if he finds a mate this season. Last night the dogs were thrown out of my room as the little chap just wouldn't stop his antics, and the big one won't stay put the whole night. The female has been enjoying all the attention, and teases the little chap mercilessly when he finally desists. Let us see what form the canine circus takes tonight!

This is easily the most entertaining post I've read in a long time! Other than your poor foot of course, dips. Feel better soon and keep posting!

@Parul: Thank you! Coming from you, this is praise indeed:) The foot is really much better now.

Surgery? Wha? This is what happens when you rely on FB and miss out. Hope you're feeling much better and moving with a spring in your step now!

@Mom Gone Mad: Much better now- no longer limping! I honestly didn't want all of FB going berserk over my health! The crazy dogs were much more blog-worthy:)

Funny! On another note, I have always wondered how long-haired dogs manage - even when it's not summer it would be quite humid, right? No wonder they demand the a/c as their birthright :)

@Lekhni: In summer they are shorn, and look quite pathetic, poor things. Delhi is not too humid most of the year, though. They do love the air conditioner almost all the year, apart from the coldest months, when they have to wear woolly coats!