The Toddler is Curious

As is but natural. All toddlers are. The world is theirs to explore.
Our granddaughter is no exception. My son calls her the FBI.
We called her Dopey Chand Jasoos, having combined the title of a 1982 film and a particular expression that our son also used to have in moments of deep thought.

We were meticulous in our efforts to toddler proof the house.We needed to protect both her and our valuables from each other!

Every accessible (to the toddler) plugpoint was taped shut.

All breakables were removed from low levels.

All our ceramic coasters were packed away.

Our large, low, glass topped coffee table was covered first with a folded durree, then with a thick bedcover as tablecloth. This was our phone table, and the toddler would sit on it and press the orange speaker icon on the telephone, thrilled with the sound it made.

We had small locks put on our 1985 vintage sideboard, which housed some crockery and our medicines, as well as some alcohol- the section on the right is called the dava-daaru almaari!

My old glass-fronted Parsi crockery cupboard had a lock but no key. The carpenter carefully removed the lock, which the RE then took to the neighbourhood chaabiwallah, and brought it back with a pair of keys., which the carpenter then re-installed.

The RE's filing cabinet had keys, which were in hiding in his desk which had been pushed to the wall. So the doors were tied up with a ribbon, but the drawers above were left to the mercy of the toddler, who would open them whenever she chose to. The contents were boring papers and envelopes, hence safe!

The RE thought that the bookshelf in the dining room would be safe enough, but I remember well the toddlers I have dealt with. My motto remains: never trust a toddler. I tied the handles of the bookshelf doors together with ribbons. One afternoon, while sitting on her mother's lap at the dining table, the smart young lady unties the ribbon and gleefully shows me that she can open the bookshelf doors! 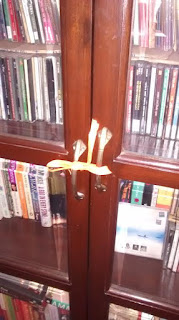 All objects on our bedside tables are endangered. Books are picked up and examined. Picture frames need to be rescued, as does our early morning thyroid medication. Lamps and their switches fascinate her.

The day they were leaving was the day Ms. Toddler decided to raid her grandma's kitchen. After investigating each of the lower cupboards, she was happy with several empty plastic boxes, and also demanded my rolling pin, which is identical to the one they have in their home. Several spatulae joined the kitchen equipment on the carpet.

It's almost a week since they left. Our world has changed once more. We still haven't put many things back in their original places. The TV is reinstated as our major entertainment source. The carpet looks forlorn, bereft of both toys and toddler. We miss our little Jasoos and her thorough investigations.