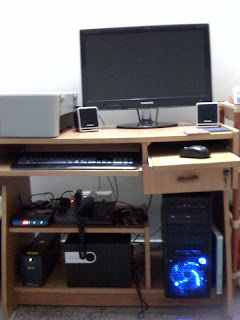 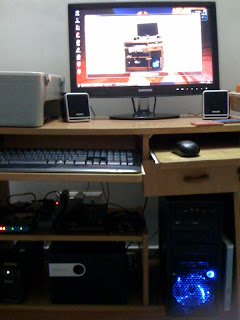 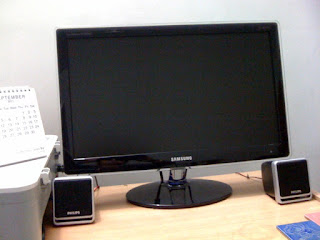 My old computer has finally retired, after several attempts to revive it over the last year or so.
During the last couple of months I would actually give the CPU a tight slap to start it, poor thing. It would also spontaneously shut down, which was, as you can imagine, extremely annoying. The monitor's colours had been looking quite ill for about a year, and there were many programmes that were next to impossible to use on it. After much thought, I decided to get a new desktop, rather than a laptop.
My younger son and one of his friends have done a marvellous job in planning, buying, assembling and installing this new beauty. They have also loaded it with some wonderful music. Thank you, boys.

Our first computer was bought in late 1995, I think- an HP Beanstalk. I still remember the mouse being completely out of my control the first couple of times I tried to use it. It was replaced about four years later with a model that connected to the telephone line, and e-mail became a part of our lives. Domestic internet usage was limited in those days, and the kind of instant connectivity we have today was unimaginable. The third one was bought from Chennai, when we were living in Gummidipoondi- I used that for about seven years! That was the machine on which I started blogging (the one which has just been made redundant, poor thing), and which gave me access to some wonderful writing and some great friends. I wonder what changes will occur in this new machine's tenure!
Posted by dipali at 7:03 PM

Let me thank your superannuated computer for introducing you to the blog world. I actually felt bad giving up my first assembled computer.

So many wonderful changes. Here's to more blogging from you.

I love this new setup. :) Here's to many happy memories with your new dabba. Shall we call this one Tupperware?

@Hip Grandma: I know how long I dilly-dallied!!! My son will be away for a month, and the old dabba was on its last legs, but yes, it was a hard decision to make!
@Banno: My own hard disk is also getting older- let's see how much data it can deal with!
@Sue: Arey nahin- it's crying out for a hot and happening name!

Wow!! Congratulations :) How much has life and internet connectivity changed since 1995!! I typed on a friend's computer in 1995, for the first time and knew one day I was going to have one. (It hadn't then, seemed like computers were going to become such a part of our lives).

Congratulations Dipali :) Enjoyed reading about your experiences with the machines you have had :)More writing power to u now!

My dear Dipu, Congratulations for your new machine. It certainly looks sleek, and full of verve. Wishing you many interesting writings and multifarious activities to which this beauty will give you access.I am however, stii sold to its cousin, the faithful laptop, which stays put cosily in your lap, and accompanies you even on transatlantic flights. Chacha.

@indianhomemaker:I know that I've lived most of my life without either a computer or the Internet, but it seems unimaginale now. Even a single day when systems are down is hard to endure!
@Neera: Thank you!
@gupshup: Thank you, Chacha! The important thing is to have good connectivity and ease of use, which is probably a matter of habit. I have used laptops in various places, but I feel happiest when sitting at my desk with a good big monitor. And for other times I have my dear little iPhone.