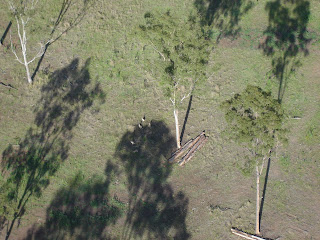 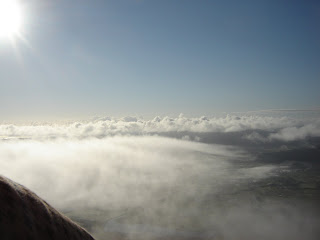 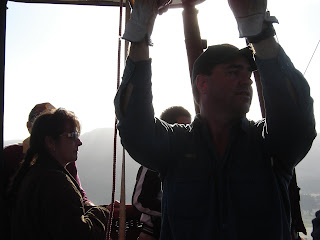 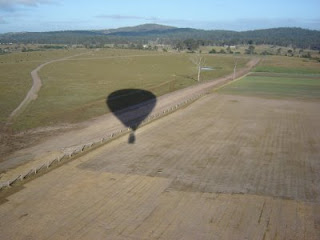 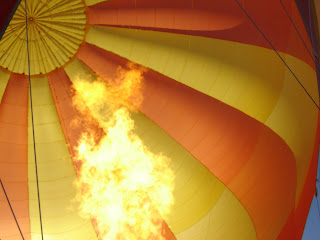 Climbing into the basket was a bit tricky, given my size, and the fact that my wrist had been troublesome and didn't want to bear any weight. I clumsily managed to get in- there are footholds on the sides of the basket. It had five sections- a central one with the gas cylinders and equipment, from where the pilot did his steering, and two divided ones on each side. So three sections bore a couple each, and the fourth a lone Japanese tourist. The flames above your head are a bit disconcerting, at first! And the top of your head feels hot when the pilot turns up the flames. You go up rather rapidly, wondering at the sudden mist when you go through the clouds.
And then the clouds are below you! The tiny creatures in the topmost pictures are kangaroos.
I'm ashamed to admit that I dozed off for a bit, as we'd got up so early. (I can truly claim to have the ability to sleep anywhere, and standing up at that !) The countryside was breathtaking- farms and forests and roads and trees. And clouds below you at times, and a magnificent play of light. Although you have a pilot, the air currents play a great role in your ballooning journey. The pilot and bus driver were in communication, so that we would all 'land' up in the same place! We had started our descent and the tree tops seemed uncomfortably close. Whoosh- more flames, more height, some clever steering and we found a convenient field to land in. What was supposed to be a half-hour joyride had lasted for more than an hour. We bumped onto the selected field, but had to go up a bit again and manually pushed into place by the drivers so that the canopy had enough place to collapse onto.
Posted by dipali at 1:56 PM

I'm scared of heights but I think I would make an effort to overcome it if I got a chance to ride a hot air balloon...

LOL at the sleeping!

@sue: when I was tiny I managed to get locked into the kitchen. Mom was terrified. They opened the door somehow, and I was fast asleep, standing up, apparently! I do remember strap hanging and dozing off on Delhi buses!