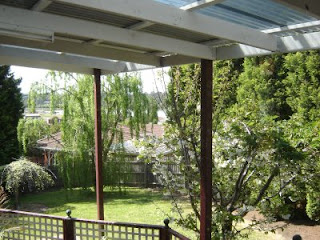 Going to Oz means dealing with their Immigration and Customs, sticky sticklers, to say the least, as Anamika also discovered on a recent visit. Being middle-aged and with strange medical histories, the SRE and I carry a fair quantity of medicines to help us stay healthy. We were advised to carry recent prescriptions for these drugs, so a quick trip to the family physician was made. I had thought of taking some Darjeeling tea as a gift, but realising how antsy they were about foodstuffs, I desisted. But at Melbourne Airport I had to relinquish a beautiful banana fibre and leather handbag, because bananas and their products are not allowed into Oz. Since we were leaving Oz at Sydney, I couldn't take the bag back to India with me. A Fabindia set of soaps was allowed in, after the box of seed pods the soaps were nestled in was confiscated. So a slightly demoralised me followed the SRE into the cold night air where our old friends R and V were waiting for us. R had mailed telling me to declare whatever I was bringing in that was mentioned on the immigration card. Another friend had scared me into actually washing the walking shoes I was carrying, so that I wasn't carrying traces of soil. Ah well, they do have their reasons, which I respect. I just wish it wasn't all so intimidating!
The suburban homes and their layouts in Melbourne seemed very similar to their counterparts in the USA. Our friends' home was over several levels, though, as it was built on a hilly plot. One most curious thing- none of the interior doors had latches, apart from the door of one toilet in the laundry room, put in because V's mother felt uncomfortable with an unlockable toilet door when she was visiting them. Apparently this is common all over Australia. Since our bedroom didn't have an attached bathroom, it was a little disconcerting. We were scolded for our shoddy planning- being with them for just two nights, and not over a weekend either. V has known the SRE since their high school days- almost forty years. They are also the people who introduced us to each other. Scoldings are definitely allowed! Anyway, R took the day off and took us into the city the next morning, by train. We boarded a wonderful Circle Line tram that goes round the city of Melbourne, and is free. We rode around a wonderful city with beautiful old and new buildings. Like complete and utter idiots we forgot to pick up the camera as we were leaving the house. There were wonderful modern sculptures near the docks. Melbourne weather is notorious for its unpredictability, so we were glad of our jackets! The city is on the banks of the Yarra river, and there are lovely restaurants and cafes overlooking the river. We had coffee and chocolate cake at a Greek restaurant, with seagulls and pigeons for company. We also visited the Melbourne casino , which is huge- it seems endless, going on and on. The Crown Entertainment Complex, of which the casino is just one part, had the most amazing fountains we'd ever seen: some had globules of water bouncing in the air. Some had jets of water which would suddenly be cut in half. The edge of the fountain was gently curved, and had water right till the brim- you couldn't tell that it was flowing over unless you touched the curve. That seemed far more fascinating than the gambling tables. We did place small bets on the roulette table- an even easier way of losing money than on the stock market these days. A little bet on the fruit machine got us some money back. It seemed fairly pointless, but the place was full even in the middle of the afternoon. Someone is raking in the money!
The photograph is of our friends' garden- when we finally remembered that we did have a camera. We didn't have enough time for the Great Ocean Road or Philip Island trips. Perhaps next time........
Posted by dipali at 9:43 AM

Fun! I wish I could have seen pictures of the fountain..the globules of water sound mesmerizing!

I wish you hadn't described the fountain :( Now I am curious and resorting to googling for it :) Is it this one?

@oj: Try the link that Lekhni has given below. But photos can't do justice to the poetry of moving water.
@lekhni: It does looks like that, but....! See above:)

Gorgeous! Am in desperate need of a vacation!!

@m4: Thanks. Hope you have a good vacation soon!

your friend has a garden I would kill for! very pretty! The immig at Oz is most strange. Most countries will discourage unprocessed food - like seeds etc. but tea and banana fibre bag not allowed is a bit much, if I may say so!

Beautiful country, and looks like you had a wonderful time. NZ has the same stringent rules about food / soil stuff. When we went they actually took the husband's shoes off to be cleaned, because he declared that the last place he had used them was in Nepal! :-)

And I'm still upset that both of us forgot we had cameras when you came to visit. :-(

Oh I wish I had read this blog before...Im in Melbourne..sandwiched in between the Crown Casino and the Docklands...on the City Circle route..it would have been lovely to have you over for lunch when you were in the neighbourhood!

@dottie: Tea I was scared to take!
They don't allow any banana products at all(:
@maggie: Sometimes I guess being in the moment(which was so memorable anyway)is better than trying to capture it! We are training ourselves to remember that we have a camera:)
@aneela z: Hi- I've dropped in at your blog occasionally, but I completely forgot that you were based in Melbourne (:-(