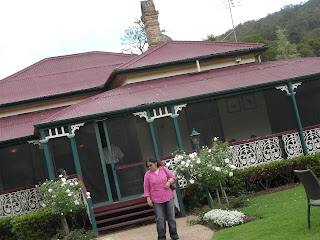 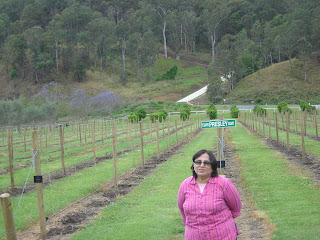 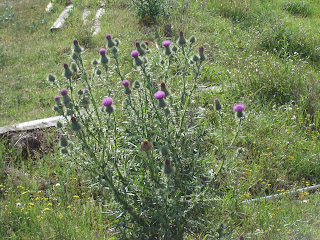 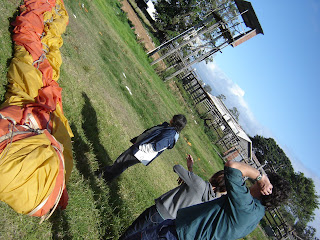 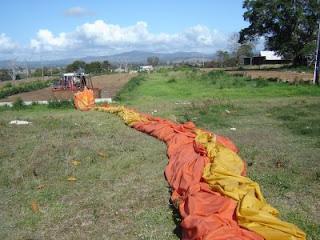 I admit I'm dumb- I realise now that Blogger uploads the pictures in the reverse order! We landed near a patch of pretty purple weeds. (See middle picture.) Anyway, once the balloon had landed and I had made my way out of the basket, the canopy had to be flattened and repacked, no small task, given that the balloon is made up of over three hundred and fifty kilograms of material. Well, the air was squeezed out, it was first rolled lengthwise, and then into a large ball which had to be packed into its bag. It was quite a job. Once we had packed up the balloon and helped get the basket back onto its trailer, we bade farewell to the pilot and the van driver, and loaded ourselves into the bus again. We were now headed for a champagne breakfast at a winery! This is part of Australian ballooning tradition!
It was an elegant house with exquisite decor, with fruit, juice, cereal and champagne laid out on the verandah, waiting for us. Eggs and sausages and toast followed. As the sole vegetarian, I was given baked beans, mushrooms and scrambled eggs. I ignored the eggs, which most of the Western world seems to consider vegetarian since they are not meat or fish or fowl. (I admit to double standards here- I used to eat eggs, and do eat cakes even now- a friend of similar habits describes herself as a 'caketarian'.) The SRE doesn't drink now, but a few sips of champagne seemed de rigeur. I had a sip from his glass, and found it, as ever, quite horrible. Though I did enjoy the mystique and celebratory aura surrounding it. We had a quick stroll in the garden, and then, ballooning mission accomplished and replete, slept our way back to the hotel,
Posted by dipali at 2:36 PM

No ,you have to reset the order of the pictures ,dear heart .Very adventurous of you, I must say and very admirable .BTW, you should have tried a mimosa rather than drink the champagne on its own .

wow! such fun, dipali (and well worth the wait!) and I can't believe you slept in a balloon!!!!

Sounds like such fun, ballooning and being a cakeatarian :)
You can cut and paste the pictures to put them in correct order. No need to reload them.

Wow,
Some adventure you had, girl.
THanks for sharing.

OK, for the champagne brekkie alone I would brave the heights. :) Never let it be said that I'm not greedy.

Lovely and adventurous! I wanna hot air balloon too ... do we have anything like this in India?

First time comment, I think! I love your blog, and am a daily reader now!

How wonderful that you got to ejoy a Hot Air Balloon ride...I tried one here (US) and it was great fun, but winds picked up that day, so we had barely 30 mins in the air before they brought us down - looks like you had the opposite effect :-)

Nice! Very brave of you to do the balloon. As EL said, brunch with mimosa is most heavenly.

you are not dumb. technology is weird! always blame technology!!!

hot air balloons sound like SO MUCH fun! u would have loved to try out something as adventurous as that. thanks fr sharing your holiday pics so generously with us!
mandira